Alfie the Beagle once weighed in at a whopping 4st 10lbs (30kg), making him 67% over his ideal weight (2st 12lb/18kg). The former heavy hound from Middlesbrough has been named biggest loser in the UK’s largest pet slimming competition after shedding an incredible 34% of his bodyweight in just six months!

His health and life expectancy were at serious risk from his excess pounds. But, after pounding the streets and cutting back on the excess food for the last six months, he’s lost a third of his bodyweight - 1st 9lb (10.3kg) - and wowed PDSA judges. He is now a much healthier 3st 1lb (19.7kg)

Alfie’s owner, Emily Simcox (25) adopted Alfie five years ago. His previous owner’s busy lifestyle meant they found it difficult to take him on walks and give him the time and attention he needed to be fit and healthy. As a result, Alfie piled on the pounds and found it difficult to get around.

Emily has been trying to help Alfie slim down ever since, but back in April admitted she needed to shake off some bad habits.

She said: “Taking part in PDSA’s Pet Fit Club is unquestionably the best thing I have ever done. Seeing the transformation in Alfie has been incredible – he’s a completely different dog and we’re over the moon. Before, he was sluggish, tired and looked sad a lot of the time. He couldn’t even walk up the stairs; he’d struggle half way up and then had to stop for a rest before getting to the top. And on walks, he would sluggishly walk towards a ball we’d thrown and often wouldn’t bother even trying to bring it back.

“But since being on the diet, his tail hasn’t stopped wagging! He leaps and bounds and is so full of energy.

“Before Pet Fit Club, I would fill him up to the brim and would continually feed him treats as a way of showing how much I love him. Those eyes are so hard to resist. But we know now that we were drastically affecting his life by doing this and it was no good for him. It was heart breaking to say no at first. I felt as though I was starving him but with the help of the PDSA team, we managed to stick with it and learn to say no.”

But Alfie’s diet hasn’t been without its slip-ups. Emily added: “I was making a cheese sandwich and left it on the kitchen counter. I walked back in the room to find Alfie licking his lips, and the cheese sandwich gone!

“But despite the occasional challenges we are ecstatic that Alfie has been named Pet Fit Club champion. But it’s not about winning. Alfie is so much healthier and happier now and that’s more than we could have wished for.

“I want other people to realise there’s help out there. You don’t need to be embarrassed about having an overweight pet. I hope others are inspired by Alfie’s story and take their pet to the vets for advice and support. Alife is proof that change is possible - we’ll never look back!” 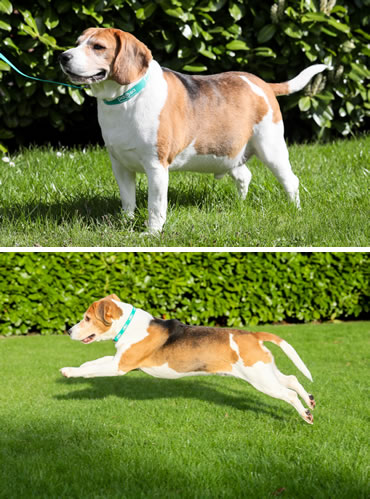 Check out the results of Pet Fit Club 2017

Get advice from our vets on how to keep your pet a healthy weight.
READ MORE

Have you been inspired to get your pet's weight back in check? Register your interest for Pet Fit Club 2018.