Gentle giant Bailey was attacked by another dog while out on his morning walk, and needs some emergency care from Kirkdale PDSA. 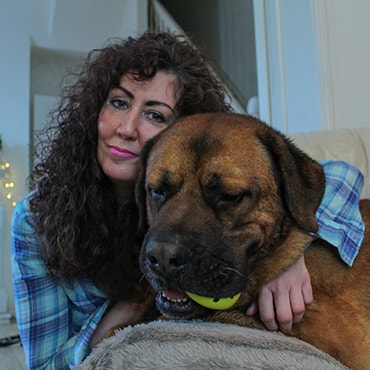 Bailey is a Dogue de Bordeaux cross German Shepherd. Despite being on the rather large side, he's a big softy at heart. so when he was out on his walk and approached by another dog that was off its lead, he wanted to make friends. Unfortunately, the other dog didn't agree and went for Bailey.

Very shaken, Bailey's owner Brenda headed straight home and applied temporary bandages to some of his wounds, but she was concerned that they were still bleeding and was worried about infection. She made an emergency appointment at Kirkdale PDSA and headed straight down.

Senior Vet Stephen examined Bailey's wounds – although the damage was not too serious, some wounds were quite deep and, with so many, it was possible that the poor pooch could go into shock.

Stephen needed to act fast. It was clear that Bailey was in too much pain to have his injuries properly examined, cleaned and bandaged without sedation, so he was admitted to get them properly assessed and treated.

Find out how Bailey gets on – watch the full episode on All 4.

Poor little Frankie had a very upset tummy, so was brought into Kirkdale PDSA to get it checked out. 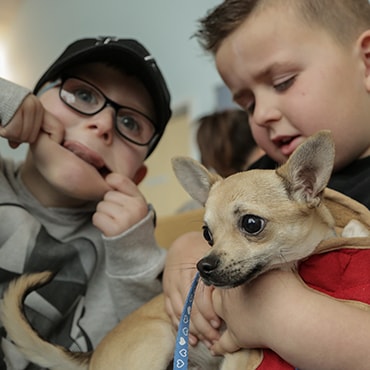 PDSA Vet Angela examined the little pup, who was off his food and suffering from the runs. His owner Kate was worried something might be seriously wrong, as she had spotted some blood in his poo.

During the examination, it turned out that someone might have 'accidentally' slipped Frankie a few chips under the table! Angela advised that Frankie should be given bland food for the next week to allow his tummy to settle, and he was sent home under strict instructions for a chip-free diet in future!

Pets can get upset tummies for all sorts of reasons.

Find out who fed Frankie chips – watch the full episode on All 4.

Yorkshire Terrier, Poppy, is a lifeline for her owners, who both have hearing difficulties. But she's got a rather embarrassing problem; a rather severe case of dog breath! 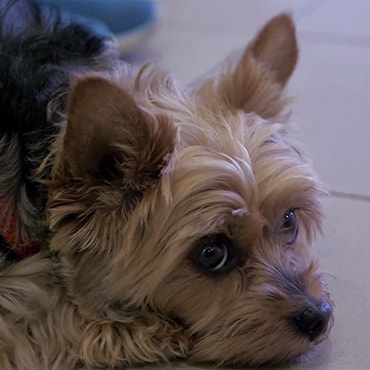 Poppy has been trained as a hearing dog and she alerts her owners, Jill and Dave, when the phone rings or they have visitors. But they noticed she'd started to have rather bad breath! She was diagnosed with dental disease, and it looked like she would have to have several teeth removed.

She was booked in for dental surgery and had to go under anaesthetic for the procedure. Jill and Dave had to do without her for the day, and waited nervously for news along with all of Poppy's Facebook followers! Meanwhile, Poppy is already keen to go home! 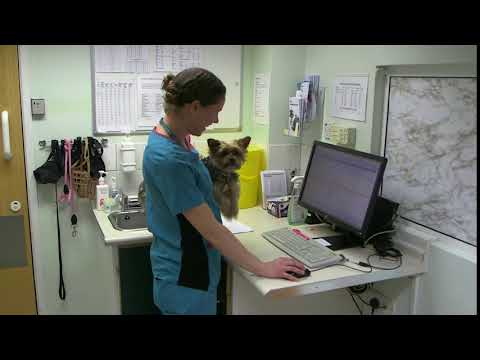 Find out how Poppy’s dental surgery goes – watch the full episode of The People’s Vet on All 4.

Staffie Kleeo needed a lump removing, so she was brought into PDSA Huyton for surgery. 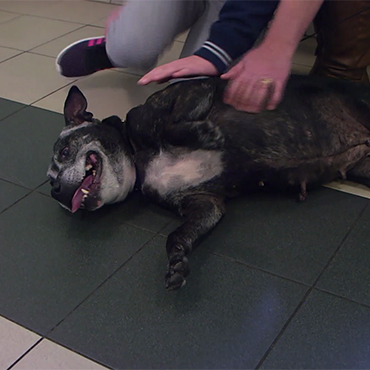 Staffie Kleeo has had a lump growing on her nipple for some time. As it was getting larger and starting to bother her, the decision was made to remove the lump. She was booked in for surgery.

Her worried owner Julie is rarely separated from her beloved pet, and understood there are some risks with surgery. At 12-years-old, Kleeo is an older dog, and she’s also a little on the ‘tubby’ side. Even though slightly higher, the risks of her going under anaesthetic are very low.

But it was undoubtedly on Julie’s mind as she dropped Kleeo off at the pet hospital that morning. She also learnt that having Kleeo neutered when she was younger could have prevented the lump from forming in the first place.

She said: “I’m worried sick that I’m going to be coming home with a lead, and nothing on the end of it.”

Vet Jen gave Kleeo a pre-op check and reassured Julie that, like all pets, she would be well looked after while she stayed at the hospital, and that she would be carefully monitored by highly trained staff throughout the procedure.

Removal of a breast lump in a dog is a major operation. Mammary glands have a lot of blood vessels, so during surgery it can be difficult to locate all the ‘bleeders’ as Jen calls them. It was a nervous wait for Julie, so she headed to a café for a cup of tea with her family while she waited for news.

Find out if Kleeo pulls through – watch the full episode on All 4.

Find out all about the causes of bad breath in your dog and what can be done to treat it.