When pensioner Maureen Edwards (73) adopted three-legged cat Bobby in 2013 she was looking forward to giving him the best possible life.

But in May last year Maureen, from Worsley, Manchester, noticed something wasn't quite right with her seven-year-old white cat.

She said: “I noticed the tips of Bobby’s ears had started to go black, so I took him to PDSA where they diagnosed skin cancer. They explained that he would need to have the tips of his ears removed to stop it spreading. I was shocked as I didn’t realise cats could get skin cancer.”

The vet team at our Manchester Pet Hospital operated to remove the tips of Bobby’s ears in a procedure known as a partial pinnectomy.

Vet Fiona Buchan, said: “It often comes as a big surprise to owners when they are told their pet has skin cancer because they think their fur acts as a natural sunscreen. White-furred pets like Bobby are at most risk because their skin lacks natural pigmentation which helps to block out the harmful UV rays. Areas with little fur, such as the tips of the ears, also get greater exposure to the sun’s UV rays.

“Because Maureen brought Bobby to see us as soon as she spotted the first signs, we were able to operate and remove the cancerous tissue. In the future, keeping Bobby out of the sun as much as possible by providing a safe, shady area for him in the garden and using pet sunscreen will help prevent a recurrence.”

“I adopted Bobby shortly after my husband died, but as a pensioner there’s no way I could have afforded the treatment he’s needed,” she said.

“PDSA means the world to me, the vets and nurses in Manchester have kept me and Bobby together and I’m so very grateful.” 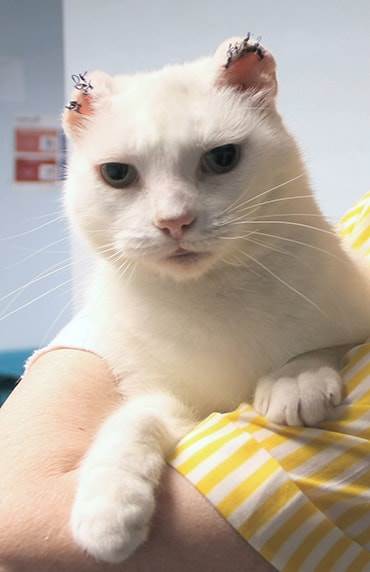