A 12-week-old Staffordshire Bull Terrier has been saved by emergency surgery after swallowing a kitchen knife.

In one of the most astonishing x-rays ever seen, the eight-inch knife is clearly visible in the tiny puppy’s body.

“Macie was making a squeaking sound – I thought she’d swallowed part of a toy,” says Irene. “Then she was sick, but there was no sign of a toy and she started choking.”

“I was terrified. Poor Macie was still choking and, by the time we arrived at the vet’s, there was blood coming out of her nose. The loss of our previous dog was still very raw and the thought of losing Macie was devastating.”

The young puppy was admitted, and x-rays immediately revealed the severity of the situation. The knife handle had passed through Macie’s stomach and into her intestines, while the tip of the knife was still in her gullet. She underwent emergency surgery straight away to remove the knife while Irene, her partner and four children waited at home for news.

Irene added: “I couldn’t believe it when they said Macie had swallowed a knife. I have no idea where she got hold of it – she could have pinched it out of the dishwasher, but no-one saw what happened. None of us could sleep that night as we knew Macie might not survive.”

Happily, the operation was a success and the following morning Macie was transferred to the PDSA Pet Hospital in Shamrock Street, where her recovery began.

PDSA Vet, Emily Ronald, said: “I’ve never seen an x-ray like Macie’s. She was extremely lucky to survive. Her saving grace was that she swallowed the handle-end first – the blade-end would undoubtedly have pierced her organs, likely causing fatal injuries.

“The morning after surgery, she was bouncing all over the place as if nothing had happened. Macie has been back for frequent check-ups over the past two weeks and we’re pleased she’s recovering and healing well.”

Expressing her gratitude to PDSA, Irene said: “Although she’s only young, Macie is already a big part of the family. She brings us so much joy and happiness, and means the world to the children. Without PDSA, she wouldn’t have received her life-saving treatment and wouldn’t be here today.”

Vet Emily added: “Macie is just one of the lucky pets to benefit from PDSA’s emergency service which has received generous funding from players of People’s Postcode Lottery. Thanks to their support we’re able to provide thousands of life-saving treatments across the UK.”

As well as using their mouths to eat, dogs also use them to investigate objects. But can sometimes they can swallow an item by mistake. Known as ‘pica’, this behaviour can lead to dogs eating some very bizarre objects. Over the years, PDSA vets have removed everything from tent pegs and golf balls, to radio aerials and rubber ducks during surgery. Read about other strange things eaten by pets. 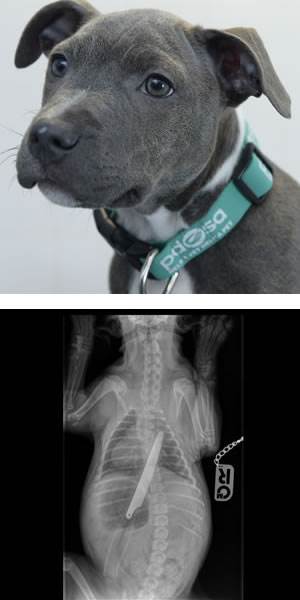