How to introduce guinea pigs

Guinea pigs are very sociable creatures and need to live in pairs or small groups, as they would in the wild. We recommend always having two or more guinea pigs together, with safe introductions to keep them happy.

Our guinea pigs need other guinea pigs. They love nothing more than the company of their own kind; this allows them to express their natural behaviours and meets their social needs. Our company is not enough - if you have one guinea pig on their own, or your guinea pig recently lost their pal, they will often struggle. We’re not able to stay with our pets 24/7 and they need a friend of their own species to understand them and communicate with.

It’s really important that if you’re planning to bring a new guinea pig into your current guinea pig’s life (or into an already existing social circle) you do it very carefully. This will stop any disagreements – after all, it’s not easy to live with someone you don’t know!

Which friend is right for my guinea pig?

Social groups in the wild can vary from pairs to both small and large groups, but guinea pigs always feel safer and comfortable with their own kind so shouldn’t be kept alone. Remember to make sure they have the perfect home.

If you've found the perfect friend for your guinea pig (or guinea pigs if you already have a small group!), you’ll be really keen to start introducing them. But it’s important to take things slowly.

We would recommend keeping them apart until you are sure your new guinea pig is healthy Give them a couple of days to settle in on their own- coming to a new home can be quite stressful, which can lead to illnesses they could pass on to your existing guinea pig(s). If your guinea pigs develop any symptoms of illness, get them checked by your vet before you start introductions.

Never try to put your guinea pigs together straight away – give them time to get to know each other first, allowing them to start to become friends before they start living together all the time.

Some rescue centres offer a ‘bonding service’, which can be really helpful if you’ve not had any experience bonding guinea pigs before or if you don’t have enough space for two full size guinea pig homes until they’ve made friends. Contact local rescue centres to see how they can help, even if you didn’t get your new guinea pig from them.

Step one - seeing each other 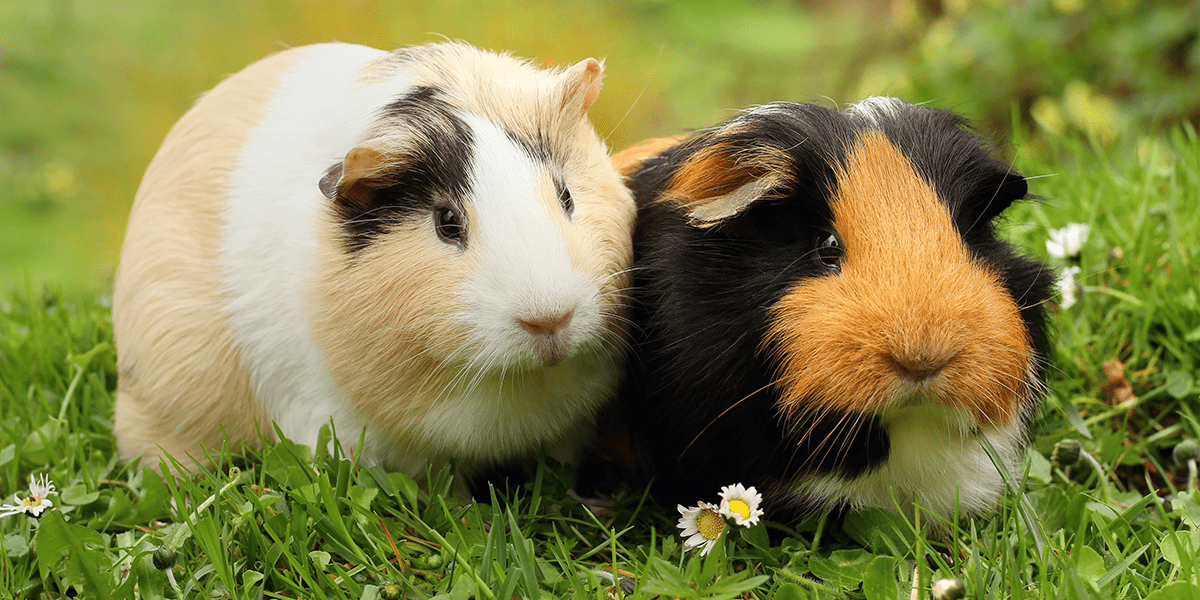 Start introductions slowly- starting out with scent and sight. Ideally have two separate set ups for your guinea pigs in the early days, somewhere they can see each other, but aren’t touching (for example on opposite sides of the same room).

At the same time, start swapping their bedding, toys and other items so they get used to each other’s scent before they meet face-to-face (this is called ‘scent swapping’). You might also want to consider switching them between the two homes each day- this helps them get used to a combination of their two scents. 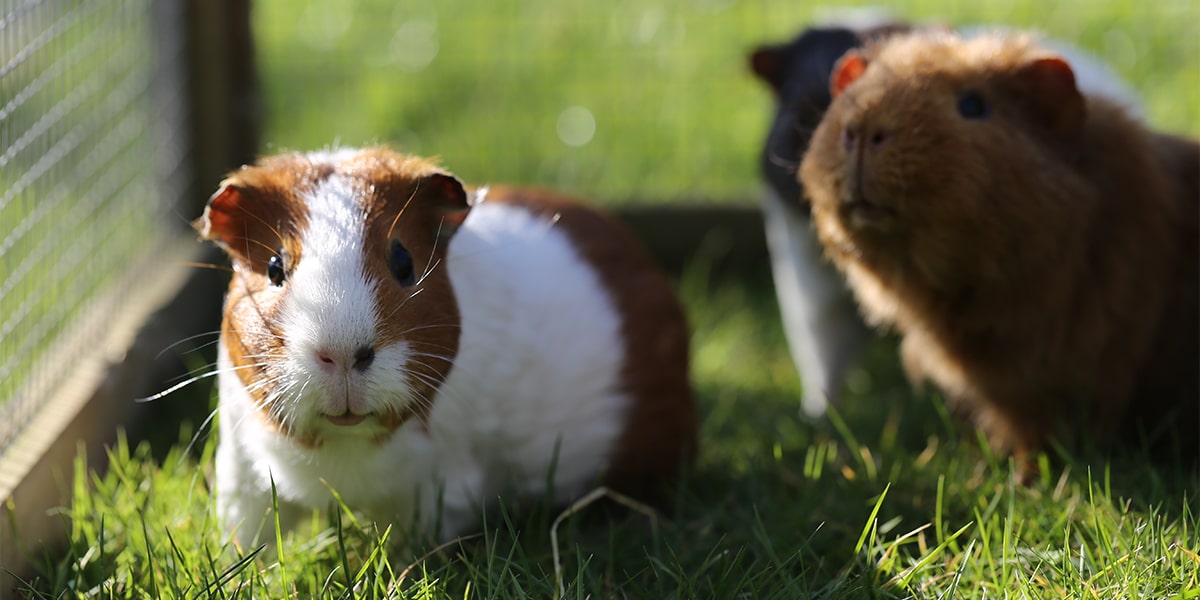 After a couple of days of scent swapping, try moving their enclosures and runs together so they can see and smell each other through the bars. Still keep a barrier between them, but make sure they can see, smell and sit with each on either side of the barrier. At first, you’ll need to keep a close eye on them in case they start to fight- especially if they could reach their noses through the bars and give each other a nip. You may want to scatter food around so they associate being close to each other with something nice!

With this step, keep an eye out for positive behaviours that means they’re getting along. Look for signs such as squeaking to each other, sniffing each other, spending time together (for example sitting on either side of the barrier) and ‘popcorning’ (sudden jumps in the air – basically your guinea pigs’ way of saying they’re happy!).

Once they keep showing positive signs, you’re ready to move on to the next stage 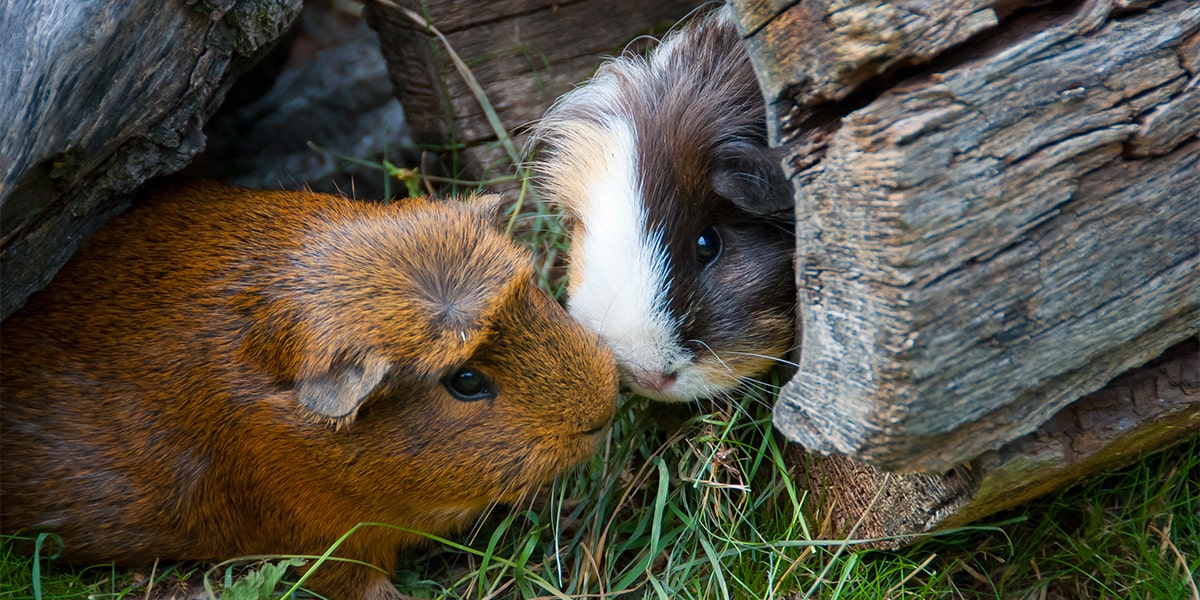 When your guinea pigs seem happy together, they’re ready to meet properly, with no barrier between them!

If you can, this should be on ‘neutral’ territory so that neither of them see their meeting place as ‘theirs’ and get protective over it. It’s like meeting somebody for the first time in a park or coffee shop, rather than your bedroom!

The easiest way to do this is to move one of their runs to a new area (either a new room or an area in the garden). Prepare their meeting ground by putting out lots of toys and scattering a few safe veggies around to keep them happy and occupied. Make sure any tunnels and boxes have at least two holes in, so none of your guinea pigs can get backed into a corner.

Now it’s meeting time! Allow them into the neutral territory at the same time and let them both explore. Keep a close eye on them and look for signs your guinea pigs are getting along. There will be lots of noises and interaction. Often sniffing each other, sometimes following each other or chasing, and eventually progressing to resting together and grooming. Start out with short supervised visits (10-15 minutes) and gradually build up the time as long as they stay happy together.

If you notice any signs of negative behaviours (for example biting or fighting) it’s important to separate your guinea pigs, but be very careful as you don’t want to hurt yourself or them. Don’t use your hands to get between them; have a clean dustpan or piece of board ready that you can use to slip in between the guinea pigs if they need separating. Have a couple of hand towels handy as well, which you can throw over them as a distraction if things get heated -  this will give you a few seconds to get a barrier between them or allow you to pick one guinea pig up while the other is under the towel. Be extremely gentle, as you don’t want to accidentally hurt your guinea pigs or get injured yourself.  If they do start fighting, go back a step to the scent-swapping stage for a few days before trying again.

Some guinea pigs will settle very quickly, sort out their personalities and create a firm friendship with just one meeting. Others may be more challenging and need to have a few more closely supervised sessions before they get to know each other. It’s not always love at first sight, sometimes it can take time for them to get to know each other and feel comfortable living together.

Once they’re spending long periods of time together and showing all positive behaviours, they’re ready to move in together.

Step four - moving in together 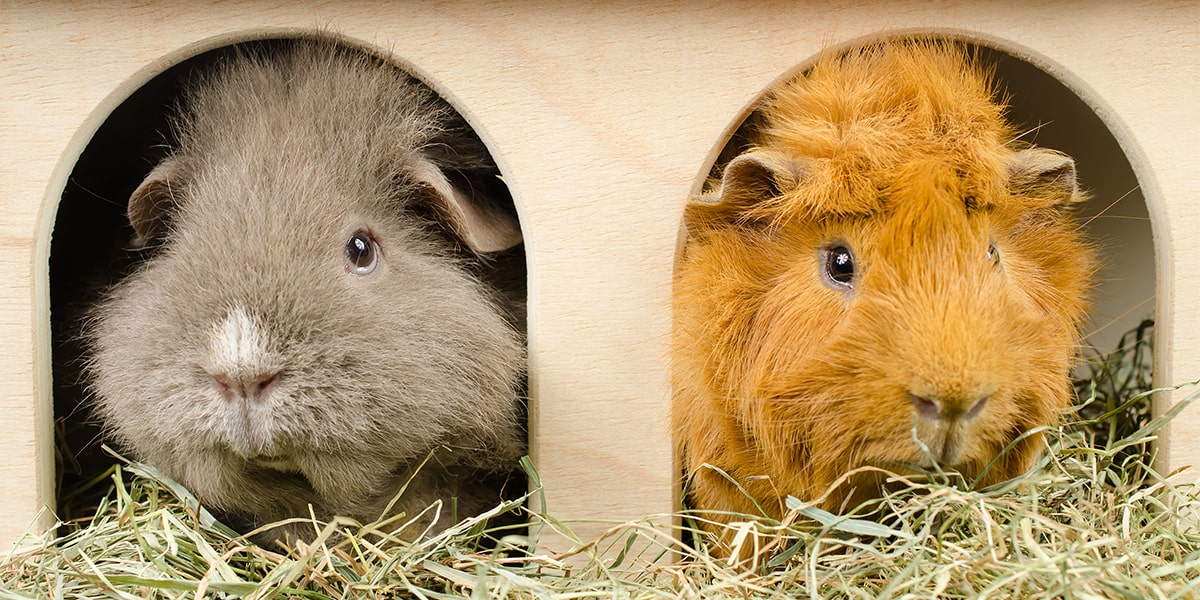 When your guinea pigs are happy together for long supervised periods, they will be ready to move in! Ideally, they should spend the first couple of weeks in a neutral territory neither of them have previously used, before moving them into their permanent home. However, if this isn’t possible, make sure you use a set up that both (or all) your guinea pigs have lived in recently, such as one of their houses which you’ve used for several swaps.

Make sure their enclosure is plenty big enough for them and take out any enclosed houses with only one way in or out. Give them lots of toys to keep them occupied and enough resources (food, water etc.) for them once they’re all together. Guinea pigs may end up fighting if their enclosure is too cramped, or they are bored due to a lack of toys.

If at any time during bonding, you’re worried your guinea pigs aren’t getting along or have concerns over their behaviour, you may need to go back a few steps and give them a bit more time to bond before the big move.

How do I know if my guinea pigs like each other?

If your guinea pigs are showing these signs, you know they’re getting along well.

Sometimes it can be hard to know if your guinea pigs are fighting or playing. As a general rule, play behaviours include following each other (usually at a slow pace and investigating things as they go), playing with the same toys and talking to each other. Chasing (running after each other, often where one guinea pig seems to mainly be the chaser), backing the other guinea pig into a corner (you will often see them raise their heads and open their mouths if they’re threatened) and nipping each other can all be signs that your guinea pigs aren’t playing and could be escalating to a fight. If in doubt, try to distract your guinea pigs for example by scattering food around their cage to encourage them to spend some time apart.

Another behaviour you might see is your guinea pigs mounting or climbing on each other- even if they’ve been neutered or are both the same sex – this is very rarely a sexual behaviour and in most cases is perfectly normal and nothing to worry about. However, if one guinea pig is mounting the other all the time, either of your guinea pigs seem to be upset or stressed by the behaviour or the behaviour is causing problems (for example bald patches on the head or back)  the mounting might be becoming a negative behaviour.

You may see a few negative behaviours to begin with; this doesn’t mean your guinea pigs won’t form a lasting friendship in the end. Some groups will bond quickly, but some take a little longer and need more time to become friends.

Guinea pigs can fall out with their friends, just like people, and although it’s uncommon, in some cases this can lead to a broken bond where guinea pigs that have previously got on well (sometimes even for years) can start to disagree. This can happen slowly over time but sometimes they can start fighting all of a sudden. There may be a reason, for example illness, reaching sexual maturity or separation, but in many cases, owners just suddenly find that their guinea pigs aren’t getting along. Although it can be very upsetting to see our guinea pigs unhappy, especially if they have a fight or injure each other, it’s important to try to stay calm and take steps to help them become friends again.

Next, you’ll need to start the bonding process above from the first step with two separate housing set ups- often your guinea pigs will get to know each other much quicker the second time around but it’s still important not to rush them back into the same home. The effort will seem worth it in the end when see your guinea pigs snuggled up together again.

It’s extremely rare for guinea pigs to fall out completely, or to not get on at all despite a slow introduction, but in some cases two guinea pigs will just seem to argue despite your best efforts. In these cases, you may need to consider if this is the right group or pairing for your guinea pigs.

It's really important to make sure all your guinea pigs are happy and healthy. You should give them a health check daily to make sure they're all OK.

Giving your guinea pigs the perfect home will help them get along much easier. Read our vets' advice on the best living situation for them.

Your guinea pigs need the right food to make sure their teeth stay healthy and they don't get too podgy. Find out more about what to feed them.