Cats in heat/coming into season

A heat (or season) is when a female cat is fertile and can get pregnant. A cat’s first season is usually at around 4-12 months old, in the first spring after they’re born. Unless they are speyed, they will then continue to come on heat every year from around February (once the days start to get longer), until around October (unless they get pregnant or have a phantom/ false pregnancy).

Interestingly, shorthaired cats tend to have their first season much younger than longhaired cats.

Although queens (female cats), tend to have slightly fewer cycles as they get older, most continue to come into heat and remain fertile until they are speyed. Once a cat is speyed, her seasons will stop and she can no longer become pregnant. 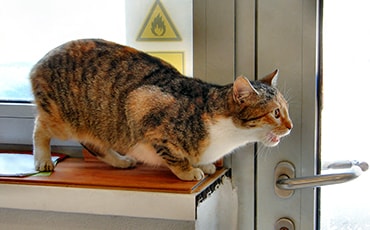 A female cat in heat – calling and wanting to go outside

Behaviour: how to tell if a cat is on heat

While your cat is on heat it’s likely she will become very affectionate, ‘flirty’, start ‘calling’/meowing loudly (it can even sound like she is in pain), rolling around, arching her back and moving her tail to one side. She will try hard to find a male cat, and male cats will be equally keen to reach her. Unlike dogs, it’s very unusual to see a cat bleed when she is on heat. Being on heat isn’t painful but it can make your cat feel a little unsettled, uncomfortable, and ‘under the weather’.

How long are cats in heat?

Unless they have been speyed, most cats come on heat every year from around February until October. Within that time, they have multiple cycles, each lasting about 2-3 weeks.

What age do cats have their first heat?

Unless they have been speyed, most cats have their first heat at around 4-12 months old, in the first spring after they are born.

Caring for a cat in heat

Your cat will be feeling out of sorts and probably a bit confused during her season, especially if it's her first season, so it's important to try to keep her happy and distracted. Keep her entertained by playing games and giving her things to do in the house (such as a treat-filled toy).

During your cat’s heat, she will want to find a male cat to mate with, and male cats will travel a long way to find her, you may even find a fan club of tomcats surrounding your house! To avoid an unwanted pregnancy, you will need to keep her indoors and away from uncastrated males for the whole time she is in season (including any that live in your household). Unless you are sure you want to breed your cat, it’s best to have her speyed ASAP. Once she is speyed, she will stop having seasons and won’t be able to fall pregnant.

Does my cat need to have a season or a litter of kittens before she is speyed?

No, most cats should be neutered at 4months old (unless there is a specific reason not to). If you are unsure, speak to your vet about the right time to spey your cat.

My cat is screaming during her season and seems very distressed, what should I do?

Most cats become very vocal during when they are in heat, but it’s very rare for a season to cause them pain. Try to keep your cat distracted if she seems upset during her season, and contact your vet if you are concerned that she’s meowing for another reason.