Blood in your cat's poo

Finding blood in your cat’s poo can be worrying, fortunately, many of the causes are treatable. Blood in poo can be fresh (red) or digested (black). Fresh blood usually appears as bright red streaks on the outside of a poo, or as drips of blood from the anus (bottom), whereas digested blood tends to turn the whole poo black (vets call this ‘melena’). Fresh blood in poo is usually because of a problem in the lower part of the guts (such as the colon, anus or anal glands), but digested blood usually points to bleeding further up the guts (such as the stomach or small intestines). It’s important to have your cat checked by your vet if you’ve noticed blood in their poo, especially if they seem unwell. 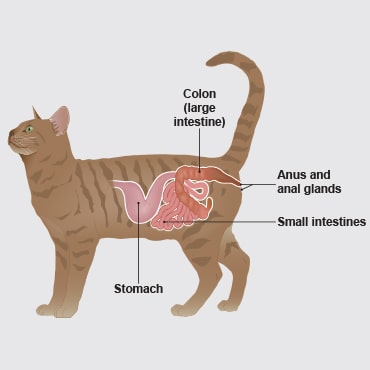 Fresh blood in a poo

Blood in a cat's poo can be caused by:

For example, Giardia and Tritrichomonas, particularly common in kittens.

Your cat might develop blood in their poo if they eat something they are allergic to or that upsets their stomach. In some cases this can also cause diarrhoea and vomiting.

Inflammation of the colon (large intestine) can cause diarrhoea containing fresh blood and mucus.

Bacterial infections such as Salmonella, and infectious diseases such as Feline Panleukopenia (FPV) can cause blood in the poo.

Similar to people, stress in cats can cause an upset tummy and in severe cases, blood in their poo.

Inflammation of the pancreas usually causes diarrhoea, which can sometimes contain blood.

Some medications (such as NSAID’s and steroids) can cause gut irritation and bleeding in the guts.

Rectal polyp’s are benign (non-cancerous) lumps inside the large intestine. If they become inflamed and sore they often bleed.

Cancerous lumps in the gut often become ulcerated and bleed, leading to fresh or digested blood in the poo (or sometimes both).

Toxins that damage the guts or cause clotting problems (such as rat poison) can cause blood in the poo.

If your cat has a bleeding disorder/clotting problem they might bleed into their guts - this can be very severe and you may also see other signs of clotting problems such as bruising or blood from the nose.

If your kitten has blood in their poo it’s important to contact your vet for advice, especially if they also have diarrhoea or are off their food. Worms are the most common cause of blood in a kitten’s poo, but it’s always best to have them checked for anything else because kittens prone to becoming quickly dehydrated when poorly.

Always contact your vet if you notice blood in your cat’s poo. If there is only a very small amount of blood, your cat is bright, eating properly and seems otherwise healthy and happy, your vet may advise trying to settle their stomach for 24 hours before having an appointment. This is likely to involve giving small amounts of a very bland diet (i.e. boiled chicken breast or white fish) regularly for a few days.

You know your cat best. If they don’t have the symptoms listed above but you are still concerned it’s always best to contact your vet.

All of our work helping the UK's pets – including this article – is funded entirely by public support.

If you've found our information useful please donate today. This will ensure we can continue to help pet owners and their sick pets for many years to come.

Support PDSA for as little as £1