Thanks to Police Dog JJ’s outstanding work, West Midlands Police were able to solve a series of robberies.

On 2 December 2015, JJ and his handler, PC Wayne Mellings, were called to help a 15 year old girl whose mobile phone was stolen at knife point. While officers comforted the girl, JJ set to work.

The police charged the offender with robbery and contacted the victims of the offender’s other crimes, which hadn’t been reported to the police. There would have been little chance of the offender being caught that day without JJ.

We’re really proud to be able to celebrate the achievements of this incredible young police dog, who is helping to make our streets safer. 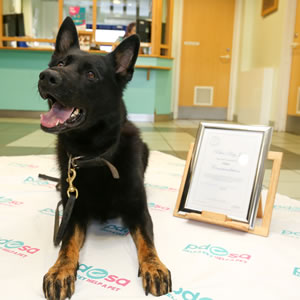