When PD Max and his handler PC Janson Wong clocked on for their shift on 8 March 2015, they had no idea that Max's unique set of skills would make him a hero...

While PD Max and PC Wong were on duty, a call came through reporting a 54-year-old woman missing. She was suffering from acute memory loss and was affected by around 10 seizures a day. Her partner made the call and was extremely worried about her. She'd been missing for about two hours and due to the worsening weather conditions had become a real concern for all the emergency services who'd turned out to assist in the search.

The location was rural, surrounded by farmland and wooded areas. With the M50 motorway close by and, owing to her condition, the woman having no road sense whatsoever, the search parameters were made very difficult.

was aware of the danger that after two hours the track may have become affected by the weather.

As night drew in and the temperature began to plummet, a large-scale search operation unfolded.

PD Max and PC Wong began searching the last know location of the woman and Max soon took an interest in the ground and started tracking across the nearby fields.  The Police helicopter was now overhead and picked up a heat source.

Fifteen minutes into the track, Max’s nose came off the ground giving PC Wong some indication that he had scented something in the air nearby. Max eagerly pulled towards a prone figure in the gloom of the night.  Max had indeed found the missing person who was now in a bad way, barely conscious, fitting and suffering badly from hyperthermia.

PC Wong gave immediate first aid and comforted the lady as well as advising people of their location. Help soon arrived and the lady was taken to Gloucester Royal Infirmary where she went on to make a full recovery.

This proved to be one of the busiest nights of the team’s career as they also had to deal with a number of other incidents. One male was detained following a lengthy track through the streets. Two more people were also arrested on suspicion of drink-driving, having been tracked by Max when they ran off from their crashed vehicle.

All in all, it was an exceptional night of policing, highlighting what a real asset Max and PC Wong are to the Constabulary and the communities they serve.

They no doubt saved the life of the missing woman and brought the other wrongdoers to justice.

Max’s story clearly demonstrated the powerful effect that service dogs can have on our lives and is a very deserving recipient of the PDSA Commendation.

Max retired from active service and is now enjoying a life of pampering at home with Janson and his family. 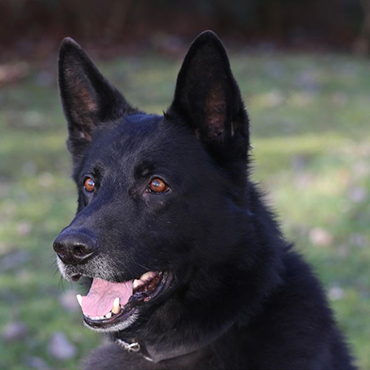 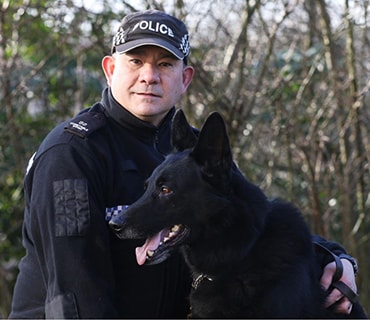 The PDSA commendation celebrates the unparalleled devotion and enrichment that animals bring to our lives.