A Golden Spaniel who provided support and comfort for special agents during the Second World War, has been honoured with a PDSA Commendation.

Cromwell, or 'Crommie', as he was affectionately known, belonged to Squadron Leader Cautley Nasmyth Shaw, who ran the Secret Intelligence Service outpost at Farm Hall in Godmachester, Cambridgeshire.

Secret papers, uncovered by local historian Roger Leviers in 2016, told the story of how Crommie would provide comfort and companionship to the operatives, returning from high-stress secret missions inside occupied Europe.

Roger explains: "I stumbled upon a chapter in the private papers of Wing Commander Bruce 'Bonzo' Bonsey, who was second in command to Nasmyth Shaw, which shed light upon the actions of Crommie and the part he played in the wellbeing of the operatives, or 'Joes', that stayed at the Hall.

"Crommie was an extraordinary dog who could sense the state of mind of agents and respond accordingly. Until I found these papers, Crommie's story was untold, but I felt that the role that he played should be recognised, which is why I nominated him for a PDSA Animal Award."

Wing Commander Bonsey's paper describe Crommie as "a Golden Cocker Spaniel of unusual intelligence, and a very happy, friendly nature; in fact, he was quite famous as he was mentioned many times in Joes' telegrams, which they sent on safe arrival, the invariable message being "love to Crommie"."

Bonsey’s papers also describe how Crommie’s fame had spread into Europe, with German interrogators asking the crew member of a downed plane, how their Squadron Leader and his dog Crommie were doing.

Bonsey’s papers continue: “Crommie loved the Joes and the Joes loved him. Many a time, I saw him go and sit beside a Joe who was worried or unhappy, with remarkable results in cheering the chap up with this sympathetic attention.”

Bonsey writes: “The “magic” of this dog began to work and Joe became a bit calmer, though still very touchy.

“After arrival at Farm Hall, he refused a meal or a drink, went straight upstairs, put the dog on his bed, got undressed, took Crommie in his arms and went to sleep. The Conducting Officer told me that the next morning when Joe woke up and found Crommie still there, he was like a “new man”, happy, calm and flat out to go off again that night.”

Crommie’s PDSA Commendation, which recognises the unparalleled devotion and enrichment that animals bring to our lives, was presented outside the Porch Museum to Nasmyth Shaw’s two sons, David and Charles Shaw.

David Shaw, commented: “At this small but immensely important wartime unit at Farm Hall, linked so intrinsically to Tempsford airfield, about fifty permanent staff provided the base that enabled extraordinary things to happen, all contributing beyond measure to the war effort.

“This small group of devoted, intrepid and immensely brave people were working behind the scenes, behind the lines and out of sight to help make the end of the war a reality.

“Behind them were those who contributed to the wellbeing of the 'Joes', the moral component, the supply and sustenance of the will to fight, the morale boosters.  Now we know that Crommie was one part of that component, providing a calmness, a routine presence and a completely non-judgemental devotion that was truly inspiring - all, actually, being a so-called 'normal' dog; quite amazing.”

Golden Cocker Spaniel, Walter, also attended the presentation as a proxy for Crommie.

Amy Dickin looks after the Animal Awards Programme at PDSA, presented David and Charles with Crommie’s PDSA Commendation. She said: “We know all too well the powerful effects that animals can have on us and Crommie’s story shows how valued his companionship was to the people around him.

“Our Animal Awards Programme recognises the role and contribution of animals to human life and we are thrilled to honour Crommie with a PDSA Commendation.” 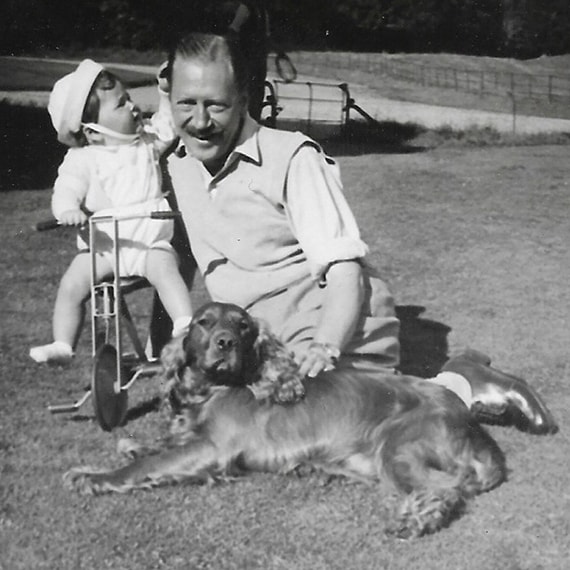 Crommie relaxing on a day out 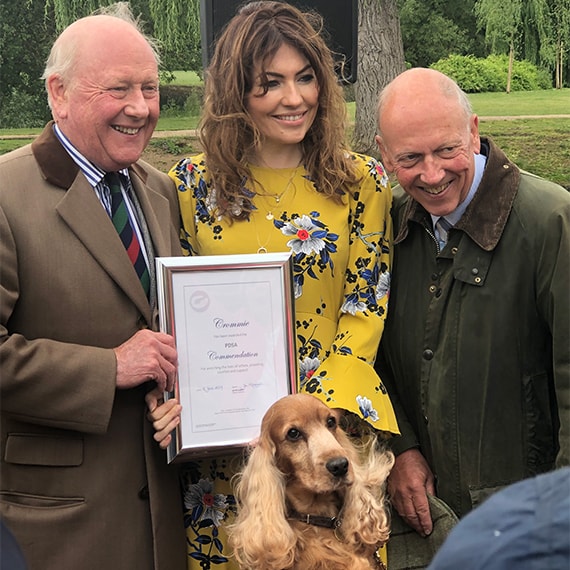 Cocker Spaniel, Walter, stood in as proxy for Crommie's Commendation