During his second tour of duty as a Canine Protection and Detection dog, MWD Kuno faced dangers and struggles but still carried on with his duty even in the face of gunfire. Watch his incredible story: 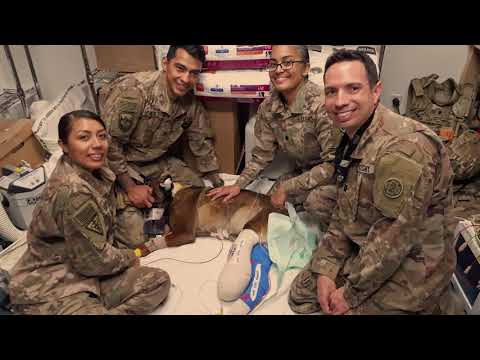 Kuno was trained to be a MWD and excelled. He knew his job and was good at it, so when the time came his handler was confident in Kuno’s abilities.

In 2019, Kuno was deployed as a Canine Protection and Detection dog overseas in direct support of specialist UK and host nation forces. Despite the mountainous, unforgiving and dangerous areas Kuno and his human colleagues found themselves in, he successfully conducted 16 operations over a 5-month period.

Kuno’s role was to detect explosives, find hidden weapons and incapacitate the enemy if ordered to do so. His team felt safe following wherever Kuno led them.

In May 2019, Kuno was deployed on another operation which would change his life.

The enemy was expected to be well-armed, well-prepared and willing to fight to the death

Kuno and his handler were among the first off the helicopter. They raced across open ground, met by a wave of machine gun fire. Miraculously, no one was injured and they made it safely to the compound with the rest of the assault team.

Kuno was put to work straight away, being released to incapacitate an insurgent. He led the team safely through the compound, alerting them of a variety of hidden weapons and explosives they would otherwise have been unaware of.

Once through safely, Kuno returned to his handler and the team continued their mission towards another set of buildings in the compound. All of a sudden, grenades started detonating near the team and they faced more machine gun fire.

An enemy insurgent had concealed himself from the team and was pinning them back with heavy fire. They knew they couldn’t advance without sustaining heavy casualties but couldn’t stop the enemy firing at them from their position. Confident in his abilities, Kuno’s handler released him to incapacitate the enemy.

Without hesitation, Kuno ran towards their attacker, taking him by surprise in the dark. The attacker fired blindly at Kuno and sadly a number of bullets found their mark, hitting the dog’s hind legs.

Surprised by the speed and aggression of Kuno’s assault, the insurgent fired wildly into the darkness at the shape bounding towards him

But Kuno didn’t stop. He continued to plough through the rain of bullets, bravely launching himself at the attacker without breaking stride. He quickly incapacitated him and continued on the mission despite his wounds.

Because of Kuno, the assault force were able to enter the courtyard and neutralise the enemy forces. Only then did Kuno relent, but his battle was far from over.

Kuno’s injuries were severe. He was given immediate first aid and evacuated with the assault force, but the full extent of his injuries still weren’t clear and his team were worried he wouldn’t make it. It was a race against time to get him the veterinary care he needed to survive.

He required several urgent operations to stabilise him before he could return to the UK. Thankfully, Kuno pulled through, but his injuries were life-changing. Sadly his rear paw couldn’t be saved and he would need a prosthetic paw and months of rehabilitation to help him walk again.

Despite everything, Kuno never gave up. His recovery was long and gruelling, but he stayed the bright, upbeat and loyal dog his handler had always known and is now back on three paws.

Kuno’s bravery and determination were fundamental in the operation, which resulted in the most significant success against Al Qaeda for several years. It’s not just because of this operation, but so many others Kuno was involved in, that make him thoroughly deserving of the PDSA Dickin Medal.

His recovery is on-going, but Kuno is now enjoying his retirement, living the quiet life with his loving family. 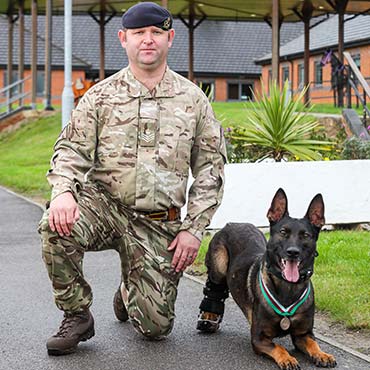 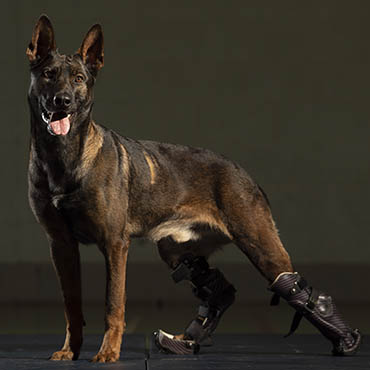 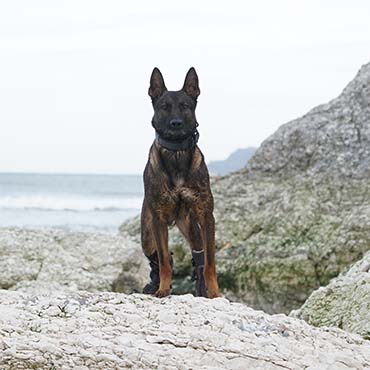