We’re really proud to announce that Sergeant Reckless, a US Marine Corp horse who served during the Korean War, has been awarded the PDSA Dickin Medal – the animal equivalent of the Victoria Cross.
A US Marine Corps war horse that survived one of the bloodiest battles in modern military history has been awarded the PDSA Dickin Medal for her bravery and devotion to duty.

Reckless was trained as an ammunitions carrier by the US Marine Corps but her bravery and life-saving work during the Korean War saw her promoted to Sergeant.

One of Reckless’ finest hours came during the Battle of Outpost Vegas in March of 1953. In just one day of the battle, she made 51 trips from the Ammunition Supply Point to the firing sites. She then carried wounded soldiers down the mountain to safety before heading off back into the fierce battle.

Sgt Reckless was nominated for the PDSA Dickin Medal by her biographer Robin Hutton, supported by the US Marine Corps. Robin said: “Although Reckless was wounded twice, she didn’t let that stop her or slow her down. There is no knowing the number of lives she saved. What she did in this battle not only earned her the respect of all that served with her, but it got her promoted to Sergeant.

“Her heroics embody the word Marine and those who served alongside Reckless truly loved her. She was loved by the marines; they took care of her better than they took care of themselves – throwing their flak jackets over her to protect her when incoming fire was heavy, risking their own safety […] Her relationship with the soldiers underscores the vital role of animals in war, not just for their prowess and strength in battle, but for the support and camaraderie they provide to their fellow troops.” 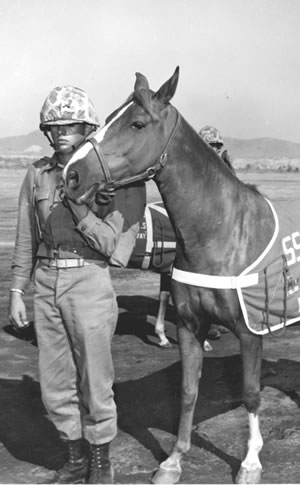 Read more about Sgt Reckless and her extraordinary work for the US Marine Corp.
Read the full story

We honour acts of extraordinary animal bravery and devotion with our series of globally recognised medals.
FIND OUT MORE

We’re all about saving, protecting and healing pets. Find out more about how we help pets in need and how you can support us.
What we do