Two-year-old Jack Russell crossbreed Biscuit has made a full recovery, thanks to PDSA, after cheekily eating a potentially fatal amount of dark chocolate when her owner's back was turned.

Biscuit’s owner, Carolyn, was extremely worried when Biscuit managed to get her paws on her son’s chocolate treat. She knew human chocolate could be dangerous to dogs, and was devastated at the thought of losing their family pet.

Her fourteen-year-old son, Thomas, who has autism, has struck up an unbreakable bond with Biscuit. The family’s four-legged friend plays a huge role in providing comfort and companionship, and even more so during the pandemic.

Carolyn said, “I’d bought Thomas a present – it was one of those chocolates shaped like a spanner which he loved! We were upstairs together, when Biscuit disappeared out of the room. All of a sudden we heard a crunching sound, and then we remembered the chocolate. We rushed to her and caught Biscuit red-handed, eating Thomas’ chocolate!”

Fearing for Biscuit’s life, Carolyn contacted her local PDSA Pet Hospital, in Nottingham, who told her to bring Biscuit in right away as the vet team realised that she had eaten a potentially toxic dose.

Biscuit was seen by the charity’s out-of-hours emergency service. She received an injection to make her sick to prevent further absorption of theobromine, the chemical in chocolate that can be fatal to pets. When she vomited up a stomach full of chocolate, it looked hopeful that she would make a full recovery without any further treatment.

Unfortunately, when she returned home, poor Biscuit’s condition took a turn for the worse. She was unable to settle and was shaking. Worried that she was showing signs of chocolate toxicity, Carolyn was advised to bring Biscuit back to the Pet Hospital immediately.

Biscuit’s condition meant she needed an intravenous fluid drip to help flush out any remaining toxins from her body, along with medication to calm her upset stomach and make her feel more comfortable. She was kept at the Pet Hospital for 48 hours for around the clock monitoring.

PDSA Vet, Sarah Campbell, said, “Chocolate can be extremely poisonous to dogs. Just a small bar of dark chocolate contains enough theobromine to have serious consequences for a small dog like Biscuit.

“The amount of chocolate she had eaten could have been fatal without treatment, but thankfully, we were there to provide life-saving care before it was too late.”

Carolyn said, “I can’t believe how toxic and damaging chocolate can be to dogs. The guilt I felt was the worst, but not once did the staff at PDSA make me feel bad for what had happened.

“They kept us informed about what was going on the whole time and I fully trusted them in treating her. I wouldn’t have been able to afford Biscuit’s treatment without PDSA. They were just fantastic and their help means the world to all of us.”

Carolyn said, “My son, Thomas, rarely leaves the house as it’s a real challenge for him. But when Biscuit was unwell, Thomas was there for every appointment, and that’s a big deal for him. He also came with me to pick her up from the Pet Hospital. It just shows how much our dog means to him, and why we are so grateful to PDSA.”

Biscuit is now fully recovered thanks to the life-saving treatment provided by PDSA’s veterinary team in Nottingham.

Carolyn said, “Biscuit’s back to being full of beans. She’s a bright little dog and is back to playing mischief. And while she hasn’t learnt her lesson, we certainly have.” 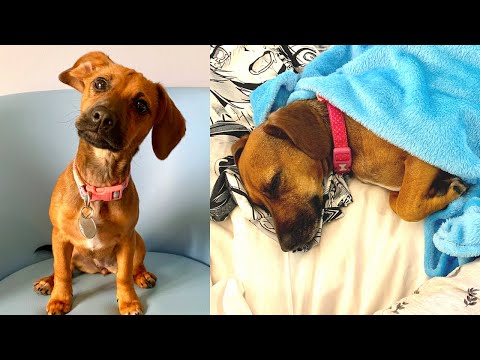 Every year, we helped over 388,000 pets. Without us, emergency cases like Biscuit's would be left untreated and many pets could lose their lives or be separated from families who love them.

We wouldn’t be here for dogs like Biscuit without your support. Please consider donating today.

Your dog's diet has a huge impact on their health and happiness. Find out about the best diet for them on our pet health pages.

Want to read more stories like Biscuit's, keep up with the latest pet wellbeing news, or perhaps you just want to support PDSA? Get your latest PDSA news with our Newsletter.