A five-month-old kitten from Merseyside required life-saving treatment and emergency surgery to save his back legs after being hit by a car.

After calling PDSA, Buddy was rushed to our Pet Hospital in Huyton, where the team of vets and nurses spent three hours pinning the broken bones in his tiny legs back together in a life or death operation.

Buddy’s owner Sarah McCririe (32), from Prescot, witnessed the kitten dart out of the front door, straight into the path of an oncoming car.

Sarah said: “I was receiving a delivery and Buddy ran out right under a car’s wheel. He came out dragging his back legs. I ran over screaming. I was scared to touch him and felt sick. Thankfully there was no blood, but his back legs were limp and he was crying loudly.”

After calling, Sarah took Buddy to our Huyton PDSA Pet Hospital in Liverpool where our emergency veterinary team began urgent treatment to save his life. After being stabilised and given pain relief, X-rays revealed he had broken both of his hind legs. His chances of survival were looking extremely slim due to both the severity of the breaks and the risk of anaesthetic for a kitten in need of such complex surgery.

In a bid to save his life, the team began the intricate three hour operation to pin the broken bones in his tiny legs back together. 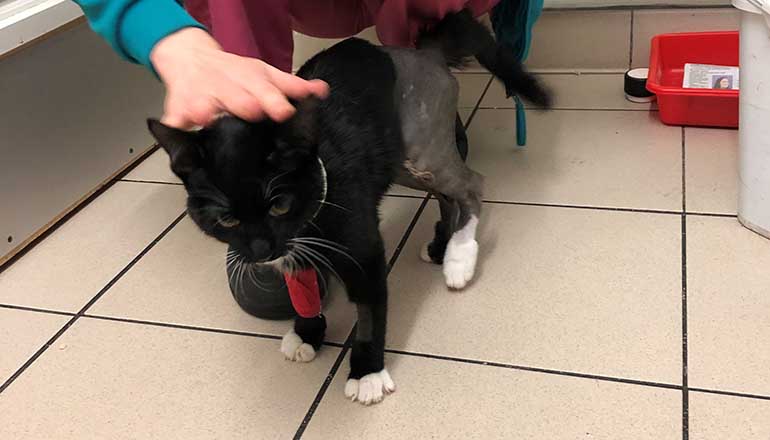 Despite concerns about his size and young age, Buddy made it through the operation, but his critical condition meant he needed constant care. He was kept in the Pet Hospital and closely monitored by our vet team for four nights.

Buddy still has a long way to go, but so far, thanks to the life-saving work of our veterinary teams, he is making a steady recovery at home. Alongside his regular painkillers and antibiotics, his owner is watching over him while he’s on strict cage rest.

“Buddy means the world to our family and I cannot thank PDSA enough. The team have been amazing.”

Sarah said: “I’m so glad that they have been able to continue providing emergency treatment for pets in need, there’s no way I could have afforded to pay for his treatment privately – we would have had no choice but to put him to sleep, but PDSA gave him a second chance.”

In times of uncertainty and hardship, pets like Buddy will still fall ill or be injured and need emergency, life-saving care

Every year, we helped over 388,000 pets. Without us, emergency cases like Buddy’s would be left untreated and many pets could lose their lives or be separated from families who love them.

We wouldn’t be here for cats like Buddy without your support. Please consider donating today.

What to do if your pet has been in an RTA

Looking to pamper your pet? Why not shop some of our vet-approved products! When you buy with us, you'll help pets like Buddy.