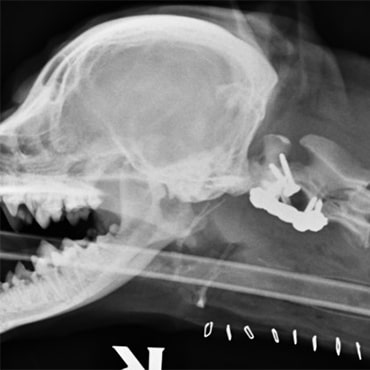 My age at the time: 8 months

Where I live: Glasgow

My humans are: Naomi Weir and family

I was treated by: Sandyhills Vets in Glasgow, and Vet Extra Neurology at Broadleys Veterinary Hospital in Stirling

When the Weir family decided to take on a new puppy, they thought they’d done everything right. But they were tricked by cruel puppy farmers who set up a ‘pretend mum and dad’. Very soon they noticed little Milo wasn’t well and seemed to bump into things frequently. Vets advised he had hereditary eye problem, meaning he would sadly lose his sight within months, and there was no cure.

Milo adapted well to his sight loss, but there was even worse was to come due to the terrible breeding and conditions he’d suffered in early life. He started crying out in pain at night but nobody knew why, even after tests and treatment trials. When Milo went in to be neutered, vets took the opportunity to x-ray him – these revealed that his neck bones were badly deformed and out of place. They were in danger of damaging or even severing his spinal cord – one wrong turn of his head and he could’ve been completely paralysed.

Little Milo was referred to specialists for urgent surgery. It was a risky procedure, but without it Milo was a ticking time bomb, and often in severe pain. Once in surgery it was even more complex than they’d first thought and the operation lasted around six hours – vets corrected his spine and fitted plates and screws to hold everything in place. Eventually, a very worried Naomi got the call to say it had been successful, and Milo was coming round from the anaesthetic ok.

He went home soon after the operation, but needed two weeks of strict cage rest. He needed regular medication and the family ensured someone was always home with him. Once his vets were satisfied he was healing ok, Naomi gradually and carefully increased Milo’s activity levels. It was a long few months for Naomi and her family, but eventually Milo was back to running around like normal.

Milo also has some hip and shoulder problems and may need further surgery, but thankfully for now he’s comfortable and able to enjoy life. His health issues were caused by unscrupulous breeders who put profit over welfare, and didn’t carry out the necessary health checks and routine care for the parents and puppies.

The family reported the puppy farmers to Trading Standards. It’s believed Milo is one of the few survivors from this irresponsible operation, many poor pups having suffered from parvovirus and other illnesses. The Weirs now know what to look out for when getting a puppy and although they wouldn’t change Milo for the world, they don’t want to put another dog put through what he’s been through.

Much of Milo’s treatment was covered by his insurance, but Naomi had to pay around £2,000, which her family helped with.