Tiny Trinny was left at death's door after a ferocious attack from a larger dog, leaving her with deep wounds and in danger of losing her leg. 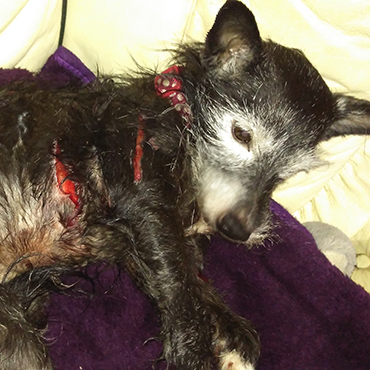 Where I live: Manchester

My humans are: Julie Keeling and Mark Asprey

I was treated by: Manchester PDSA Pet Hospital

Little Trinny was out on a walk when she suffered a ferocious attack from a large dog. The tiny terrier was left with deep puncture wounds to her chest and severe lacerations to her shoulder. Distraught owners Mark and Julie rushed her to Manchester PDSA Pet Hospital, who warned him that she might not survive the ordeal.

Trinny was in severe shock and the injuries to her shoulder were so bad that, even if she did survive, there was a strong chance she could lose her leg. But the vets and nurses were determined to do everything they could to save her, and to try and save her leg if possible. Once she was stabilised, she had surgery to stitch her many wounds back together.

Trinny needed constant nursing and two further operations to try and save her leg. She stayed at the pet hospital for a week receiving intensive care. Mark visited as often as he could, bringing in her favourite treats and food to encourage her to eat.

PDSA vet nurses hand fed Trinny to keep her strength up, and finally were able to give Mark and Julie the amazing news that her leg had been saved and could come home. They were overjoyed to have her back with them, but at first she still needed round-the-clock care and daily visits to the vet to have her wounds cleaned and dressed.

It was a difficult time for the family as Julie, who suffers with long term illnesses, was taken into hospital not long after Trinny returned home. Julie eventually had to have her own leg amputated and needed plenty of Mark’s support, and he's now her full time carer. He spent weeks going between the vet and Julie at the hospital, but Trinny means the world to both of them so they were determined to do whatever it took to get her back on all four paws.

Trinny was a perfect patient and always had a tail wag for everyone. Three months of recovery later and she was back to full health, providing vital companionship for Julie and Mark. In fact she bounces around as if nothing ever happened, and is still as friendly and loving as ever.

Julie and Mark are eligible for treatment for Trinny at PDSA, and the cost of her treatment was around £1,600.