Passive smoking is when we breathe in smoke from other people's cigarettes, cigars, or pipes. We are all aware of the risks of passive smoking in people, and especially children, but did you know that it is actually damaging our pets’ health as well?

Why does second-hand smoke affect pets?

Most pets breathe in second-hand smoke in their home. This exposure to smoke in the home is having a direct impact on pets.

Even if you open up the windows or doors, smoke still spreads around your home. Almost 80% of tobacco smoke is invisible and has no smell so you might not notice how far it spreads. Smoke can contain over 5,000 different chemicals many of which are toxic to both people and pets, but can build up on surfaces and clothes or even the pet’s coats.

Research has shown that dogs and cats can be exposed to significant amounts of smoke when living in a smoking household. Cats could be affected even more than their canine counterparts. This is because toxic smoke particles settle on their fur and cats could swallow these when they’re grooming themselves.

Birds in particular have extremely sensitive respiratory tracts so can find cigarette smoke very distressing, while toxins in cigarette smoke can dissolve into fish tanks affecting our fish. Other pets, like rabbits, guinea pigs, hamsters or any animals living inside your home, are also vulnerable to second-hand smoke.

You should also be careful leaving ashtrays around pets as even cigarette butts pose a risk due to the heavy metals and toxins in the cigarettes which they could accidentally eat.

All pets are sensitive to nicotine so if you’re trying to quit smoking you should always be very careful that nicotine replacement products such as patches, gum, inhalers or e-cigarettes are kept out of paws’ reach.

How does passive smoking affect pets?

Pets suffer from a lot of the same conditions as humans do from passive smoking:

Lowering the risks if your pet lives in a smoking household

Many owners aren’t aware of the impact on their pets. When they realise the effect passive smoking has they choose to smoke outside of their home as a way to reduce their pet’s exposure to the harmful chemicals. Other ways you can help to reduce the risk include:

Although you can reduce the amount of smoke your pet is exposed to by going outside, stopping smoking completely is the best option for your pet’s future health and wellbeing.

Will vaping harm my pet?

Just like in cigarettes, most vaping liquids contain nicotine – sometimes even more so than cigarettes. As nicotine is very toxic to our pets, it’s important to keep them well away from it. We would always advise not smoking cigarettes of any kind, including e-cigarettes, around your pets.

The main risk from vaping comes from the liquid inside the glass cartridge. This is extremely dangerous because even a small amount of e-liquid can kill. Curious mouths might chew an e-cigarette if they can get to it. Even a small crack can be enough to put your pet at risk from the liquid.

Along with the risk of the vaping liquid, pets could also swallow parts of the actual e-cigarette or even the battery!

E-cigarettes can be really tempting for our pets, especially if they have an interesting flavour or smell. You can keep your pet safe by:

If you think your pet might have swallowed any part of your e-cigarette (especially the liquid) contact your vet straight away as this could be an emergency. 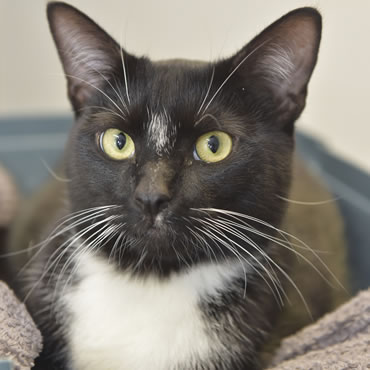 Alvin's owner, Jackie, was shocked when our vets warned that her smoking could be the cause of Alvin's Asthma. She took immediate action to help Alvin:

“He’s my baby so I was horrified to think that my smoking could be harming his health. I used to smoke in the same room as him but now I go outside."

Jackie has seen an incredible improvement in Alvin's health since stopping smoking around him. She's now planning to quit for good for her own health as well as Alvin's.

Here are some tips from our vets to help make sure your pet’s heart never misses a beat.

Pets need to eat the right diet and get enough exercise to stay fit and healthy.

Read our vets' guide to the hidden hazards around the home and help keep curious paws out of harms way.