A Newfoundland dog, who saved nine people and a dog from drowning during a ten-year water rescue career, has been awarded the PDSA Order of Merit – known as the animals’ OBE – for outstanding devotion to duty.

Whizz, who sadly passed away earlier this month aged 12, spent most of his life dedicated to patrolling the Bristol Channel and the River Severn with the Royal Navy Rescue, the Severn Area Rescue Association and Marine Volunteer Service.

As well as being a water rescuer, working alongside his owner David Pugh, Whizz also enriched the lives of hundreds of people as a fundraiser and therapy dog.

The PDSA Order of Merit was presented to Whizz’s cousin, Tizz, and owner David Pugh at a ceremony on the quayside of the Docklands Scout Project on the Isle of Dogs, London (Tuesday 22 March 2016).

Whizz is the third dog to be awarded the PDSA Order of Merit, which recognises animals that display outstanding devotion to their owner or wider society, above and beyond normal companionship – and represents an exceptional example of the special relationship between animals and humans.

The gentle giant who stood at over six feet tall on his hind legs and weighed 12 stone, was trained to rescue people in peril from the water by owner David when he was just a year old.

Whizz’s esteemed career saw him carry out some amazing rescues including:

In August 2008, a family were enjoying the day at Oxwich Beach, Wales. Their two small girls had persuaded their parents to buy them a small inflatable dinghy. Suddenly the parents realised they couldn’t see their girls and panic set in: the dinghy had drifted out to sea and they were spotted on the horizon with a boat approaching. The girls had been thrown from their dinghy by a large wave and Whizz, along with a lifesaver, leapt from the lifeboat. Whizz pulled the girls to safety.

In February 2007 Charlotte Burroughs was out walking her two Red Setters Flynn and Topper when she realised that Topper had wandered off. Charlotte became increasingly worried and returned home distraught. On her way back she passed David, who was walking Whizz and she asked if he had seen Topper. David explains: “I don’t know what prompted him, but Whizz suddenly took off and started running towards a disused water treatment pool. He jumped in the water without hesitation, as was his nature. As Charlotte and I approached, we saw Topper in the water, struggling to get out as the sides were too slippery and steep and he’d hurt his legs trying to get free. Whizz pushed Topper towards me and I helped pull him onto dry land. There is no doubt that if Whizz hadn’t acted when he did, Topper would have been in grave danger that day.”

On another occasion in 2011, Toni Curtis from Bristol was enjoying a swim in the sea while on her family holiday, when she began having an asthma attack. Toni said: “I am a proficient swimmer and love to venture out into the deep water. The asthma attack took me by complete surprise and as I was treading water; my airway closing and struggling to breathe, I realised just how isolated I was. I was sure that nobody would see me and panic really set in. The next thing I knew I heard a muffled voice, telling me to ‘grab the dog’ and before I knew it, I was being pulled to the safety of the lifeboat. Whizz had saved me and I will be forever in his debt.”

As well as his water rescues, Whizz raised thousands of pounds for charity by taking part in Newfoundland Water Rescue Days. People were sponsored to jump into the sea (wearing life jackets) and were rescued by Whizz and his fellow Newfoundland water rescue dogs. David set up the charity Newfound Friends in 1989 to raise the profile of the breed and use their skills to raise money for a number of human and animal charities.

Whizz also transformed the lives of sick children and adults through his visits to hospitals, nursing homes and hospices, as well as visiting servicemen injured in the line of duty.

Whizz’s medal was presented to fellow Newfoundland Tizz, by PDSA Director General, Jan McLoughlin, who said: “Whizz’s life was utterly devoted to saving and enriching the lives of the humans he met. His story embodies the enormous contribution that animals make to our lives. He is a thoroughly deserving recipient of the PDSA Order of Merit, which celebrates the outstanding devotion that Whizz displayed.”

Whizz’s owner David Pugh, said: “I am bursting with pride for Whizz. He was a dog in a million and I am truly heartbroken that he isn’t here to receive his medal. Whizz loved working and had an extraordinary talent. Not only was he strong and gentle – he was also so emotionally intuitive. This made him the perfect rescue and therapy dog and a beloved companion to the hundreds of sick children and adults he met along the way.

“I am thrilled that Whizz has been recognised with the PDSA Order of Merit – Tizz has some big shoes to fill today!”

His good work goes on with a fundraising pledge

Whizz’s owner David and PDSA Director General Jan McLoughlin today announced that they will be returning to the quayside of the Docklands Scout Project on 5 September 2016 to hold a special Newfound Friends fundraiser in aid of PDSA.

David said: “When I was told that PDSA was honouring Whizz with a medal, I wanted to do something in return. PDSA is an amazing charity that keeps pets and owners together through thick and thin – saving the lives of more pets than any other animal charity. My own family used PDSA in Bristol when I was young, so I know only too well what a valued service they provide.

“So Newfound Friends will be holding a fundraising event for PDSA here at Docklands Scout Project, giving people the chance to be ‘rescued’ from the wharf by one of our dogs and experience the power and grace of these beautiful creatures, while raising money for a fantastic cause.”

PDSA is the UK’s leading veterinary charity, treating nearly 500,000 pets annually across its 51 Pet Hospitals. The charity strives to improve all pets’ lives through education, preventive care and emergency treatment. 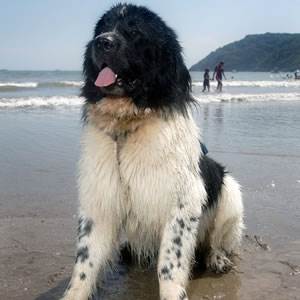