To mark the milestone 75th anniversary of the PDSA Dickin Medal* – the animals’ Victoria Cross – vet charity PDSA has, for the first time ever, gathered animal and Armed Forces representatives to commemorate the actions of the Medal’s recipients  – and the countless lives they saved.

A dog, pigeon, horse and cat – proudly wearing PDSA Dickin Medals – stood alongside members of the RAF, Army and Royal Navy at the Imperial War Museum, London, to honour those animals ‘who also serve’.

Seventy-five years ago, at the height of World War II, a messenger pigeon named Winkie became the first ever recipient of the PDSA Dickin Medal, which is awarded to animals that display conspicuous gallantry or devotion to duty while serving in military conflict.

Since then, the life-saving actions of 72 incredible animals have been honoured by the charity; 71 animals - 34 dogs, 32 pigeons, four horses and one cat have received the PDSA Dickin Medal. An Honorary PDSA Dickin Medal was also bestowed to ‘the real war horse’, Warrior, on 2 September 2014, on behalf of all 16 million animals that served in the Great War.

Jan McLoughlin, PDSA Director General, said: “Today we honour the animals who also serve: those noble creatures whose skill and courage have saved countless military and civilian lives. The face of armed conflict has changed beyond recognition over the last 75 years, yet we rely on these gallant animals as much as ever.”

The PDSA Dickin Medal was instituted by Maria Dickin, CBE. Maria founded PDSA on       17 November 1917 to relieve poverty in a very unique way; by alleviating the suffering of animals through the provision of free veterinary treatment to the pets of people in need.

A quarter of a century later, she saw the vital, life-saving roles animals were playing in the war effort – both on the home front and Front Line – and wanted to ensure they were recognised. She sought to raise the status of animals in society – believing that would improve their care. So, with the support of the War Office and Imperial War Museum, the PDSA Dickin Medal was born.

Recipients of the prestigious Medal hail from histories deadliest warzones.  From the battlegrounds of World War I and II, to the Korean War and Chinese Civil War, and the more recent conflicts in Bosnia, Afghanistan and Iraq.

The inaugural Medal was presented on the 2 December 1943 to Winkie, alongside fellow RAF pigeons, White Vision and Tyke.

Winkie (Pigeon No. NEHU.40.NS.1) was on board a Beaufort Bomber that ditched in the sea after coming under enemy fire during a mission over Norway. Unable to radio the plane’s position, the stranded four-man crew released Winkie in an attempt to raise the alarm.

Despite horrendous weather and being covered in oil, she flew more than 120 miles home, where her owner was able to pass her message onto RAF Leuchars in Fife.  A successful rescue operation was launched within 15 minutes of her return. Her actions saved the lives of her crew.

The most recent Medal was awarded on 26 October 2018 to Special Operations Military Work Dog, Kuga, from the Australian Army, for ‘unstinting bravery and life-saving devotion to his handler and his unit while on patrol with Operation Slipper in Afghanistan, 2011.

“Seventy-five years later and the Medal is as relevant today as ever.  From the wounded messenger pigeon whose determination saved the lives of an RAF air crew to the horse the Germans couldn’t kill. From the world’s only Prisoner of War dog to a life-saving ship’s cat. Their stories are incredible and unique. PDSA is proud to continue her legacy of honouring animals in war.”

Colonel Neil Smith QHVS, Chief Veterinary and Remount Officer, said: “Animals serving in the Armed Forces make a massive difference to the lives of so many. Not just those men and women they serve alongside, but the civilians whose lives our military are protecting.  They fulfil a role humans cannot replicate.  The PDSA Dickin Medal is a fitting tribute to their extraordinary contributions.”

The PDSA Dickin Medal is a large, bronze medallion bearing the words ‘For Gallantry’ and ‘We Also Serve’ all within a laurel wreath. The ribbon is striped green, dark brown and sky blue representing water, earth and air to symbolise the naval, land and air forces.

For more information on the PDSA Dickin Medal visit www.pdsa.org.uk/DM75. 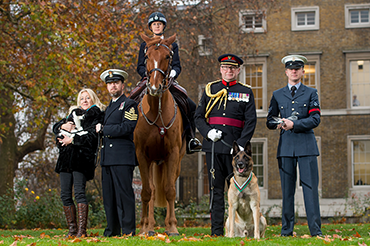 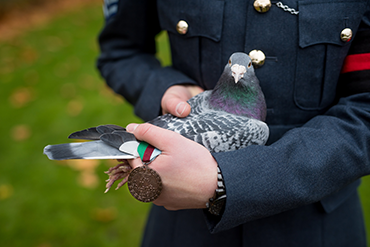 Explore our online exhibition and discover the stories of our Dickin Medal recipients.