Staffordshire Bull Terrier cross, Romeo, was nominated for his PDSA Commendation by owner Steph Hartley (29) from Welwyn Garden City, Hertfordshire. Romeo was a constant and loving assistance dog for her elderly grandmother, and is a PAT dog and regular canine blood donor for the Royal Veterinary College.

From day one, Steph knew that Romeo was a special puppy. She said: “When we adopted Romeo at five-months-old we had two miniature Dachshunds at home. Sadly, the older Dachshund, Shadow, had been diagnosed with lymphoma and was receiving chemotherapy at the time. Somehow, Romeo was able to sense this and would stay by his side and lick him gently to comfort him after his treatment. He’s always been intuitive and even as an excitable puppy, he’d know exactly when to be calm and gentle.

“But that was just the start,” Steph continued. “It wasn’t until we took him to meet my 91-year-old nan, Gladys, that we realised just how special Romeo was. They formed a bond incredibly quickly, and he instantly became her best friend.”

Romeo had such a huge impact on Steph’s grandmother, providing her with companionship and comfort, they registered him to become a PAT dog. Sadly, Gladys passed away before seeing Romeo qualify as a PAT dog, but Steph knows how proud she would have been of him.

She added: “While my nan wasn’t able to see Romeo qualify, we know how thrilled she would have been.”

Since gaining his PAT title, Romeo has been working at the Lister hospital in Stevenage, where he brings joy to patients and staff on the Stroke Wards. He also visits patients in a dementia care home in Hatfield on a weekly basis. If that wasn’t enough, he is also a canine blood donor for the Royal Veterinary College. He donates blood every three months and in doing so, has saved the lives of at least 22 other pooches.

PDSA Vet Rebecca Ashman, said: “At PDSA, we know the remarkable impact that pets have on our lives. The PDSA Commendation recognises animals who display outstanding devotion and celebrates the amazing ways they enrich our lives. It’s clear that Romeo has had a huge impact on Steph and her family, as well as all of the people and pets he helps through his PAT work and canine blood donations. It’s fantastic to be able to celebrate Romeo’s outstanding contribution to the community with the prestigious PDSA Commendation.”

Steph concludes: “For Romeo to receive the PDSA Commendation is a fantastic way of acknowledging his devotion to all those he helps. He is such a great ambassador for his breed. I’m so incredibly proud of him and I know my nan would be too.” 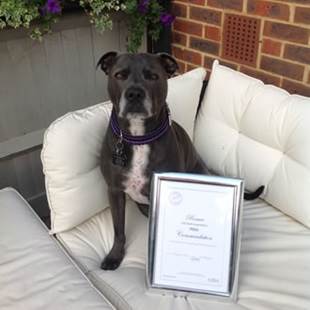