Fundraiser and animal-lover, Kerry Irving from Keswick, and his famous four-legged companions completed their mission to scale Ben Nevis on Wednesday 29 July, raising a staggering £42,000 for PDSA, to help fund care for pets in need.

Kerry and his springer spaniels, Paddy and Harry, completed the UK’s tallest peak all to raise much-needed funds for PDSA, who are facing a fundraising crisis amidst the coronavirus pandemic. Max – the pooch who Kerry credits for saving his life following an accident which led to him suffering crippling depression, waited patiently at the bottom, as he is now a little too old to take on the 4,413 foot climb.

Kerry, whose story is also captured in the best-selling book ‘Max the Miracle Dog’, said: “Hiking up Ben Nevis was a challenge that I once would have considered physically impossible following my accident. I decided to take it on as a chance to not only face my fear but also shine a spotlight on the work of PDSA who work tirelessly every day to care for pets and protect the vital bond between pets and owners. I know first-hand how important that bond is - if it wasn’t for Max, I wouldn’t be here today.

“It’s been an emotional return to the mountain and I’ve been overwhelmed by the response we’ve received both financially and personally. Max, Paddy and Harry have played a huge roll in not just my life, but for thousands of people across the globe. I’m so grateful for all the support and I’m very lucky to have them in my life.”

Kerry’s adored pooches are known for the life-changing role they played after a car accident turned his life upside down in 2006, leaving him suffering from chronic pain and depression. In 2018, Max and Paddy were honoured with a PDSA Commendation for the vital support they gave Kerry, along with the comfort and joy they provide daily to the hundreds of thousands who follow their outdoor adventures on social media. Harry joined the gang to turn the duo into a trio in 2019.

Kerry uses his far-reaching social media influence to fundraise and raise awareness for charities close to his heart, especially PDSA, which provides free and low cost veterinary care to people and pets in need.

Nigel Spencer, Director of Fundraising at PDSA, said: “A huge well done and thank you to Kerry and the boys for climbing the UK’s highest peak! They really are an inspiration and we are enormously grateful to them.

“Thanks to Kerry and the boys’ loyal and generous Facebook followers, Kerry is able to share his love of PDSA with the thousands, for which we are hugely grateful.

The support of Kerry, his canines and everyone who has donated means the world to us, particularly as the charity is facing a funding crisis. Kerry’s support means we can continue treating sick and injured pets in need across the country, and for that we are truly grateful. We don’t believe pets should suffer because of financial hardship and the support from Kerry will help us to continue our vital work.”

PDSA’s veterinary care – which is a lifeline to so many owners across the UK – costs £60 million a year to run. But with many of its shops still closed and fundraising events cancelled, the charity is losing around £3 million a month in income.

With the country plunged into financial uncertainly, and more than a million extra Universal Credit claims, PDSA expects the number of pets needing care will increase by around 50,000.

Donate to Kerry’s fundraising appeal for PDSA at his JustGiving page. 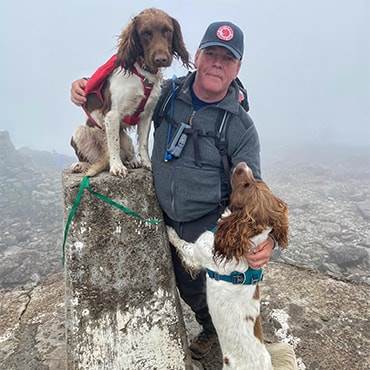