Retired military dog Kuno is to receive the prestigious PDSA Dickin Medal for valour – the animal Victoria Cross – after he was wounded in action while heroically saving the lives of British Forces fighting Al Qaeda.

Retired military dog Kuno is to receive the prestigious PDSA Dickin Medal for valour – the animal Victoria Cross – after he was wounded in action while heroically saving the lives of British Forces fighting Al Qaeda.

During a dangerous operation in 2019, three-year-old Belgian Shepherd Malinois Kuno and his handler were deployed in support of specialist UK and host nation forces on a compound raid against a well-armed and aggressive enemy when they came under attack.

Pinned down by grenade and machine-gun fire from an insurgent, the assault force was unable to move without taking casualties.

Without hesitation, Kuno charged through a hail of gunfire to tackle the gunman, breaking the deadlock and changing the course of the attack, allowing the mission to be completed successfully.

During the assault Kuno was wounded by bullets in both back legs. He was given life-saving treatment by his handler and by medics in the back of a helicopter.

His injuries were so severe he required several operations before he was stable enough to fly back to the UK. Sadly, part of one of Kuno’s rear paws had to be amputated to prevent life-threatening infection.

But now he is thriving after becoming the first UK military working dog to be fitted with custom made prosthetic limbs.

“Without Kuno, the course of this operation could have been very different, and it’s clear he saved the lives of British personnel that day. This particular raid was one of the most significant achievements against Al Qaeda in several years.

“Kuno’s story reminds us not only of the dedicated service of our soldiers and military dogs, but also the great care that the UK Armed Forces provide to the animals that serve alongside them.”

Kuno returned home aboard an RAF plane, receiving in-flight care from a Royal Army Veterinary Corps (RAVC) team. Back in the UK he was transferred to the Defence Animal Training Regiment in Melton Mowbray where he underwent extensive reconstructive surgery, overseen by Professor Dick White, one of the world’s leading specialists in canine surgery.

Under the painstaking care of Army vets, veterinary nurses and canine physiotherapists, assisted by staff from the University of Nottingham, Kuno then embarked upon an innovative and lengthy programme of rehabilitation to restore function to his nerves and muscles, just like injured service personnel.

Kuno was a friendly and enthusiastic patient throughout, he loves human interaction and especially enjoyed his sessions on the hydrotherapy treadmill.

Within months, he was strong enough to be fitted with a pioneering custom-made prosthesis to replace his missing paw, alongside an orthotic brace to support his injured limb.

Kuno, who was on his second deployment when he was injured, is the first UK military dog to be fitted with such devices. Lightweight and fully bespoke, they enable him to run and jump as he wishes, securing a great quality of life for many years to come.

“It is important that Military Working Dogs receive a high level of care if they are unfortunately injured, and Defence has military vets and vet nurses to ensure animals receive the care and rehabilitation they deserve. Kuno is an amazing dog in many ways, and we are delighted that the PDSA have decided to award him their Dickin Medal.”

Now retired and rehomed, Kuno will receive the PDSA Dickin Medal, the highest animal honour in existence for military animal valour, which will be formally presented by PDSA, the UK’s leading veterinary charity who run the world’s most prestigious animal awards programme, in a virtual ceremony in November.

“Kuno’s heroic actions undoubtedly changed the course of the mission and saved lives. He took on the enemy without fear or hesitation, never faltering from his duty despite being seriously injured.

“For his bravery and devotion to duty, he is a thoroughly deserving recipient of the PDSA Dickin Medal and we look forward to formally presenting his award later this year.”​

The world-renowned PDSA Dickin Medal was introduced by PDSA’s founder, Maria Dickin CBE, in 1943. It is the highest award any animal can achieve while serving in military conflict. Kuno will become the 72nd recipient of the PDSA Dickin Medal; previous recipients include 34 dogs, 32 World War II messenger pigeons, four horses and one cat.​ 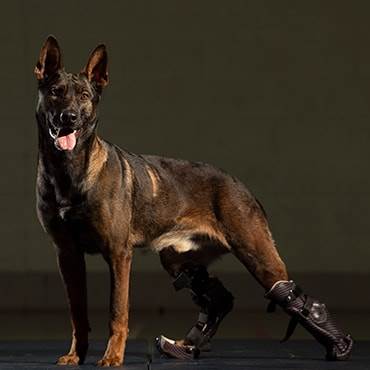 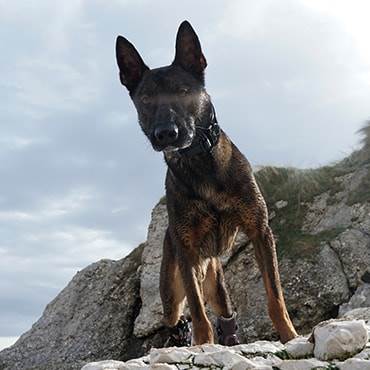 Find out more about the Dickin Medal, universally acknowledged as the animals' Victoria Cross. Instituted in 1943, it recognises animals that display conspicuous gallantry or devotion to duty in the field of military conflict.