A dog from Plymouth is the latest recipient of a prized devotion award from veterinary charity PDSA, for coming to her owner’s aid.

Bonnie, an eight-year-old Border Collie, saved her owner Val Smith (75) by summoning help when Val became trapped in thick undergrowth while out walking.

Bonnie received her PDSA Commendation at a special ceremony at the charity’s Pet Hospital, The Gwen Rees Centre, which Val regularly attends with Bonnie and her other dog, Snoopy..

Bonnie was nominated by Sam Clayton, who works at the PDSA Pet Hospital on William Prance Road.

Sam said: “Val is so dedicated to her dogs – they are her whole life and she regularly brings them to PDSA, so we’ve got to know them all really well. We heard what happened to Val and how Bonnie had helped her and I just knew that she deserved some recognition for her wonderful actions.”

Val adopted Bonnie when she was six months-old and the pair have been inseparable ever since.

Val explains: “I suffer with bi-polar disorder and both Bonnie and Snoopy have been absolutely key in helping to maintain my mental health and wellbeing. The companionship they bring me and helps me to keep going on my darker days. Having two wet noses coming to greet you never fails to raise a smile. Their healing power is tremendous and I would be lost without them.”

Earlier in May, Val had taken Bonnie and her other dog, Snoopy, out for a walk in Widey Woods in Plymouth when she took a few wrong turns, ended up on a different path and became overwhelmed by thick undergrowth.

Val was unable to move and started to panic. As her panic rose, she saw Bonnie run out of sight while Snoopy stayed close to her.

Val said: “I couldn’t move at all and planned to shout for help when the school nearby finished and the parents began gathering near the gates. While I sat there, I worried that I would never see Bonnie again. Snoopy was also very distressed by this point. He sat down next to me, whining and panting as he saw the state I was in.”

Teaching assistants Veronica Ffoulkes and Becky Zessimides from Widey Court Primary School, were out on their lunch break when they encountered Bonnie.

Veronica said: “Bonnie was distressed and trying to get our attention. She circled us, barking and looking very fractious. Becky has a dog and could tell that something was wrong so she bent down, fussed Bonnie and said ‘show me’. Bonnie darted off and we chased after her into the woods. We followed Bonnie for some time until we saw Snoopy at the bottom of a bank. We climbed up into the thick woodland, where we found Val. I couldn’t believe what had happened. We went back to school and told the children about our adventures with Bonnie!”

Val explains: “The two ladies helped me up and gave me a big hug, as they could see how frightened I was. If it weren’t for Bonnie, goodness knows how long I’d have been stuck there.”

PDSA Senior Vet, Robert Newcombe, made the presentation to Bonnie. He said: “At PDSA, we know only too well the amazing impact that pets have on our lives. The PDSA Commendation recognises the outstanding devotion that animals display and celebrates the amazing ways that they enrich our lives.

“Bonnie was a true hero that day, coming to Val’s aid when she had nobody else to turn to. Her actions deserve special recognition and I am thrilled to present Bonnie with PDSA’s prestigious Commendation award.”

Val concludes: “I’m so pleased that PDSA has recognised her actions. She really was my hero that day and I am so grateful to her. Bonnie and Snoopy bring me so much joy – dogs really are amazing!” 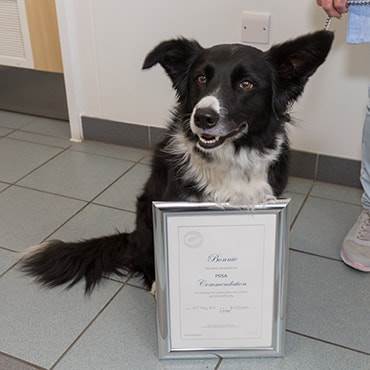