A Springer Spaniel from Durham has received a PDSA Commendation award for helping her owner to find happiness again, following a period of intense personal tragedy.

Three-year-old Tilly was nominated by owner Heather Purdy, for providing help and support following a very challenging time in her life. A life-changing illness left Heather’s husband needing round the clock care. She also suffered a string of family bereavements.

Tilly has been awarded a PDSA Commendation for her devotion to Heather, who said: “Over the last few years, my husband was left severely disabled from a massive brain haemorrhage, my daughter died from cystic fibrosis and I also lost my mother, grandparents and a cousin. I could see myself staring into a black hole and feared, if I fell into it, that I would not be able to come out.”

Heather decided to throw herself back into her work as a business partner at HPPL Canine Security Services, which provides detection dogs to sniff out drugs and weapons at events, and training to dogs with behavioural problems.

Poised to return to work and in need of a new detection dog to work with her, Heather visited a local rescue centre where she came across a Springer Spaniel that would transform her life.

Tilly was a very timid nine-month-old puppy who had a tough start in life. But taking on the challenge of transforming Tilly would also work wonders for Heather.

Heather added: “Tilly took an instant shine to me and I brought her home. I totally lost my heart to her and didn’t give a second thought to any of the qualities I’d initially been looking for in a working dog! I just knew Tilly needed help.

“She was scared of everything and everyone. She would wee, shake and bark when confronted with anything new. Gradually, I managed to build up her confidence, first by basic training, then taking her to markets, museums and eventually bigger events including air shows and even the hustle and bustle of travelling on the London Underground. I didn’t realise at the time, but as Tilly became more confident, I did too. For the first time in years, I was enjoying myself.

“When Tilly and I became a team, we were both at the lowest points of our lives. We have helped each other and if it wasn’t for Tilly, I wouldn’t be the person I am today. I might just have been sucked into that black hole. Seeing her take on every challenge thrown at her and taking it all in her stride to become a bigger, better dog inspired me to keep going and get on with my own life. I have been to hell and back on more than one occasion and it is Tilly who has pulled me back on track.”

PDSA Director General, Jan McLoughlin presented Tilly with her certificate at a ceremony at the charity’s Sunderland Pet Hospital, The Reay Hudson Centre.

Jan said: “At PDSA we understand the strength and power of the bond between a pet and their owner. The PDSA Commendation recognises the outstanding devotion that pets display and celebrates the amazing ways that pets enrich our lives. It is clear that Tilly has had a massive impact on Heather’s life and is a worthy recipient of the PDSA Commendation.” 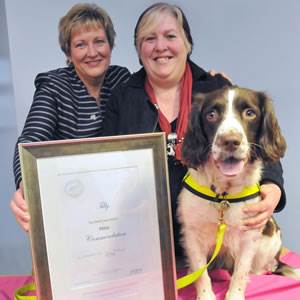