Plunge in vaccinations is a ticking time bomb for UK pets, PDSA warns

Over 7 million pets at risk of suffering and disease through lack of vaccination, latest PAW Report finds

Our latest findings reveal a record decline in the number of young pets receiving their vaccinations, leaving millions of much-loved pets unprotected and exposed to potentially fatal diseases.

The 2019 PDSA Animal Wellbeing (PAW) Report, the largest report of its kind, found the number of pets receiving their primary vaccinations when young – which protect pets from deadly diseases and viruses – has dropped dramatically from 84% in 2016 to 66% in 2019, an 18 percentage point decrease in just three years. This could leave over 7 million pets unprotected.

Findings from our 2019 PAW Report also show that one third (32%) of pets aren’t receiving regular booster vaccines, which keep them protected from potentially fatal diseases.

Of those pet owners who hadn’t vaccinated their pet, 17% said that they deemed it ‘too expensive’, an additional 17% said their pet didn’t come into contact with other animals. Other explanations included 16% who felt it was ‘unnecessary’, while other pet owners (13%) said that their ‘pet found going to the vets very stressful’.

The worrying findings coincide with growing hesitancy towards vaccinations in children, renewing One Health concerns that an “anti-vax” phenomenon – scepticism towards the safety and efficacy of vaccines – could be directed towards pets as well as children. Falling vaccination rates have been cited by the World Health Organisation as one of the top ten threats to global health**. In 2019, the UK lost its measles-free status, three years after the virus was eliminated in the country.

Basic pet needs are not being met

Commenting on the findings, PDSA Senior Vet, Sean Wensley, said: “It’s extremely worrying to see such a decline in the number of young pets receiving their primary vaccinations.

“Vaccinations have helped to protect millions of pets from serious diseases such as parvovirus, cat flu and Rabbit Viral Haemorrhagic Disease. If people don’t vaccinate we risk seeing a rise in extremely unpleasant, preventable, diseases that can cause considerable animal suffering and death.”

Sean adds: “In addition to the vaccination findings, the PAW Report found there has been a decline in owners who feel informed about all of their pets’ 5 Welfare Needs – the five things that all pets need to be healthy and happy*** - contributing to millions of our much-loved pets  not  having their basic needs met. For example, 1.9 million dogs (19%) are left alone for five or more hours every day and 1.3 million dogs (13%) aren’t walked every day, increasing the risks of obesity and poor mental wellbeing linked to isolation and boredom.

The PDSA Animal Wellbeing (PAW) Report has monitored pet welfare issues across the UK for the last nine years, surveying over 73,500 people in this time. Produced in conjunction with YouGov, the PAW Report provides a robust insight into the lives of pet dogs, cats and rabbits across the UK. Key findings from the 2019 PDSA PAW Report:

We are calling for owners to complete their online survey to share their thoughts on the health and happiness of their own much-loved pets. There’s also a chance to win a hamper worth £200.

Other concerning findings from our latest PAW Report include: 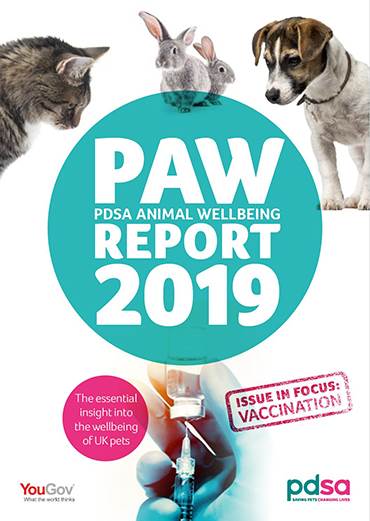 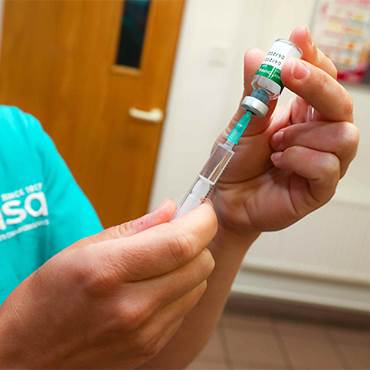 Discover all the key findings from our latest PAW Report – the most in-depth assessment of pet wellbeing in the UK.

Your chance to win!

We're calling for owners to complete our online survey - with a chance to win a hamper worth £200!