A police dog from Brighouse has posthumously received a PDSA Commendation for helping locate an elderly lady who had gone missing.

Police Dog Ty was nominated by handler PC Jerry White following an incident where Ty successfully located a missing person in West Yorkshire in May 2007. Sadly the German Shepherd died in 2014 and his award was accepted by PC White.

PC White said: “Ty and I were called to a care home where an elderly resident had gone missing at night after taking sleeping tablets. Ty soon picked up a trail nearby and led me to nearby gardens where he stopped and began barking. As I shone my torch I heard a soft cry for help and spotted the lady on the ground hidden by bushes.”

PC White has always believed that Ty’s rapid action in tracking the lady saved her life.

He added: “The lady had been missing for several hours in cold weather. If officers had needed to do a physical search it could have taken hours to locate her, by which point it could have been too late to save her.”

Jan said: “The PDSA Commendation recognises the outstanding devotion that animals display and celebrates the amazing ways they enrich our lives. It is clear that Ty made an incredible contribution to keeping his community safe during his time with West Yorkshire Police and he is a worthy recipient of the PDSA Commendation.” 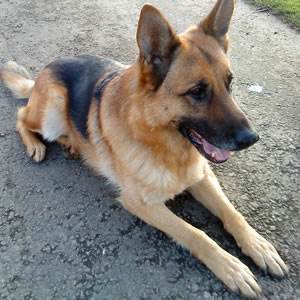