A three-year-old Labrador from Selkirk is being honoured by vet charity PDSA after successfully finding a critically injured missing woman in blizzard conditions.

Auburn-haired Search and Rescue dog Rauour – which means ‘red’ in Icelandic – was presented with his PDSA Commendation by the charity’s Vet Surgeon, John Faulkner, at the Tweed Valley Mountain Rescue Team’s Melrose base this week.

Rauour, who was trained by Search and Rescue Dog Association Southern Scotland, works as part of Tweed Valley Mountain Rescue Team. He received his award for finding a high risk casualty in storm-force conditions in February 2015, following a fruitless three-hour search by a 20-strong team on foot.

The PDSA Commendation is part of the charity’s Animal Awards Programme, which celebrates the unparalleled devotion and enrichment that animals bring to our lives. Rauour is the 88th recipient of the award.

The Tweed Valley Search and Rescue team was called out on 28 February 2015 to find a missing person that was thought to be at considerable risk. A Met Office amber weather warning was in place and blizzard conditions had already set in around the Innerleithen area.

The team had been searching the area on foot, which included dense woodland and steep inclines, for a couple of hours before Rauour and his handler, John Romanes, were dispatched to search an area on Leithen Water.

Rauour immediately started searching deep inside a thick conifer forest. Two minutes into his search, he signalled to John by barking enthusiastically who followed him into the undergrowth.

Rauour had discovered the casualty: a woman trapped in the hole of a tree root, with only her legs visible. She was unconscious and suffering advanced hyperthermia. The horrendous weather conditions, darkness and position of the victim meant that foot crews had passed by her location hours earlier without finding her.

Thanks to Rauour’s powers of scent detection, the casualty was found in the nick of time. John and his search partner Roddy administered emergency and called the Royal Navy helicopter to the hillside, to airlift her to hospital.

John, said: “Rauour’s detection skills really came to the fore that night. His role as an air scenting search dog was more effective than a 20-strong team performing a line search on the ground. Without him finding the casualty when he did, the outcome could have been very grave indeed.”

John Faulkner from PDSA presented Rauour with his award. He said: “PDSA has a long tradition of honouring animals and Rauour’s story really epitomises the value that animals bring to our lives. There is no doubt that without Rauour’s actions the situation would have been very different.

“The work of search and rescue dogs across the country is absolutely vital – their skills are priceless and Rauour’s story serves as a reminder of just how lucky we are to have these dogs here to help us.”

PDSA is the UK’s leading veterinary charity, treating 470,000 pets annually across its 51 Pet Hospitals. The charity strives to improve all pets’ lives through education, preventive care and emergency treatment. 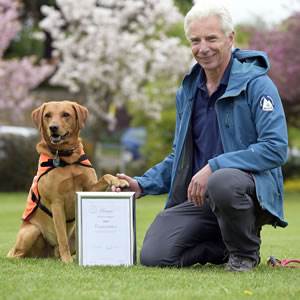