Search is on for the UK’s fattest pets

To help tackle the problem, the charity is searching for the UK’s chubbiest cats, dogs and rabbits, as it launches its annual pet slimming contest: PDSA Pet Fit Club.

Now in its 13th year, the national competition – the biggest of its kind in the UK – has helped 124 overweight and obese pets (79 dogs, 37 cats and 8 rabbits) lose an incredible 450kg (71 stone) since its launch in 2005: equivalent to a grand piano or 160,000 doughnuts! Last year’s winner, Alfie the Beagle, from Middlesbrough, successfully shed an astonishing 34% of his bodyweight.

PDSA vet Rebecca Ashman said: “Sadly the UK’s pet population is suffering from an obesity epidemic. Latest scientific literature shows that at least a third of dogs and a quarter of cats are clinically overweight or obese, but the true figures could be as high as 40%, making obesity one of the most common medical diseases seen by vets. It is a ticking time bomb that will have drastic consequences for our pets.”

Pets chosen for PDSA Pet Fit Club are placed on a strict six-month diet and exercise programme, individually tailored to their needs and overseen by vets and vet nurses at their local PDSA Pet Hospital.

Early entries in the competition include Elvis the cat from Scotland, who built up his 10kg bulk by snacking on an ‘all day buffet’ courtesy of his devoted owner, and super-sized Jack Russell Alfie who is more than double his ideal weight after enjoying steak sandwiches and pub snacks.

Rebecca continues: “Over the years PDSA Pet Fit Club has helped transform some of the UK’s fattest, unhealthiest pets into fit and healthy animals. Pets that couldn’t climb stairs or fit through cat flaps have been given a new lease of life.

“Prevention is definitely better than cure, but if owners are worried about their pet’s weight it is never too late to do something about it. With the right advice, a good diet, suitable exercise and a bit of willpower owners have the ability to make a real difference to their pet’s health, happiness and life expectancy.

“The charity is urging all owners with pets carrying a few too many pounds to enter them in Pet Fit Club.”

Up to 15 overweight dogs, cats and rabbits from across the UK will be chosen to participate in Pet Fit Club. Participants will receive free diet pet food for the duration of the competition, courtesy of Dechra. The overall Pet Fit Club Champ, crowned at the end of 2018, will win a year’s free diet food and a pet friendly holiday, courtesy of Sykes Cottages (www.sykescottages.co.uk/pdsa) and pet hamper.

Pet obesity: the cause

The charity’s PAW Report revealed that 5.7 million* UK pets (3.4 million dogs, 2 million cats and 260,000 rabbits) are fed treats every day. Owners confessed that these ‘treats’ often include crisps, cake, cheese, chips, takeaways – even chocolate, which is highly toxic to dogs and can be fatal.

Owners also admitted that their pets regularly dined on table scraps or leftovers – some 4 million* (2.4 million dogs, 1.5 million cats and 30,000 rabbits) receive these as their main meals instead of suitable pet food.

The problem is exacerbated by a lack of appropriate exercise – a worrying 1.6 million dogs (17%) aren’t walked daily. Some of these are never walked because their owners mistakenly believe that playing in the garden is a suitable substitute, which could cause them to gradually pile on the pounds.

Cats are in a similar situation – with an estimated 440,000 cats (4% of the population) not having the opportunity for exercising daily by playing or running.

Rebecca continues: “Pet obesity is a huge problem that we need to tackle to keep our four-legged friends safe. Animals who are overweight have a greater risk of developing conditions including diabetes, arthritis and heart disease. Excess weight can also seriously exacerbate other medical conditions pets may be suffering from, such as flat-faced breeds Pugs and French bulldogs struggling with breathing difficulties.

“Close to 80% of vet professionals we spoke to believed that pet obesity had increased over the past two years, and listed it among their top three concerns for pet welfare.

“Owners aren’t acting out of cruelty, in most cases they’re overfeeding or ‘treating’ to show their love and affection. A much healthier way to do this is to take them for an extra walk or give them more playtime.”

For more information on Pet Fit Club and free advice on diet and exercise for pets visit pdsa.org.uk/petfitclub.

The King is alive and he’s been hiding in Clydebank, near Glasgow. Well, his name is Elvis and he enjoys king-size portions anyway!

Just like his famous namesake, Elvis Presley, this flabby feline has got more than a roll of puppy fat as he’s got older and he now tips the scales at almost 10kg (22lbs) – around double the size he should be with an ideal weight of 5kg (11lbs).

His owner, Carole Sweeney (55), says she didn’t realise how big her boy had become until comments from family and friends left her ‘all shook up.’

Carole, a huge Elvis fan who has a collection of his posters and LP’s from her teenage years, said the concerns about her beloved Burmese cat’s size prompted her to take him to the vets for a check-up.

Following advice from staff at Glasgow Shamrock Street PDSA Pet Hospital it’s a case of ‘now or never’ for Elvis, who has been put on a strict diet in a bid to get him down to a healthy weight.

Carole said she’d been caught in a trap of feeding Elvis too much out of love. She is now determined to make positive changes for his long-term health to ensure he doesn’t leave the stage early.

She said: “I never gave Elvis treats or human food, but I’ve since learned that his portion sizes were way out of control.

“He basically had his own all-day buffet, whenever he emptied his bowl I would fill it back up again. The fact that he’s an indoor cat meant he soon piled on the weight.

“Thanks to the expert advice from the vets and nurses at PDSA, he’s now being fed a special diet food and I weigh out his portions so I know exactly how much he’s eating.”

A super-sized Jack Russell who enjoys steak sandwiches and pub snacks is set to go on a diet after ballooning to more than double the size he should be.

Alfie, from Canning Town, London, has become a regular at his owner Tony Hughes’ local watering hole – enjoying treats from patrons and nibbling crisps off the floor. But it could soon be last orders for the roly-poly pet, as PDSA vets warn his enormous size could impact on his health and life expectancy.

The 11-year-old pet currently tips the scales at a whopping 14.3kg (2st 4lbs) – around double the size of an average male Jack Russell, 7kg (1st 2lbs). His Body Condition Score (a scale vets and vet nurses use to tell if a dog is a healthy body shape) is way off the chart.

Tony (72) is now putting Alfie on a diet with support from staff at the pet wellbeing charity’s Pet Hospital in Bow.

He said: “He does look bigger than a lot of dogs of his breed, but he just never stops eating.”

“I have tried putting him on a diet before but nothing seems to work no matter what I do. The trouble is everyone loves him and likes to give him a bit of their food. He also eats stuff off the floor so it’s really difficult to manage what he eats.”

Tony admitted that he too had been guilty of feeding Alfie unhealthy snacks at home, including steak and bacon baps, but is now stopping in a bid to get his beloved dog’s weight down.

He adopted Alfie when he was just two-years-old, but it is only in recent years that he had ballooned to such a huge size.

A cheese loving dog who piled on the pounds over a 12-month period, after learning his puppy dog eyes could land him extra treats, is set to go on a diet.

Maltese Shih Tzu cross, Billy, was being “spoilt rotten” by owner Lee Piercey’s parents while he was out. After enjoying the high life, he now weighs in at a colossal 11.25kg (1st 11lbs) when he should be closer to 4kg (9lbs).

Lee, from Bolton, Greater Manchester, said he was concerned by his beloved pet’s huge weight gain. To help him fight the fat, he has applied for Billy to join PDSA’s Pet Fit Club – a six month diet and exercise competition for obese dogs, cats and rabbits.

Lee, who is a key volunteer for PDSA, adopted Billy when he was around two-years-old. He said: “Billy was a rescue dog and I’ve had him about four years. When I’m out in the day he spends a lot of time with my parents. They love him so much, but give him too many treats.”

“He loves cheese and they also give him toast but it’s not doing him any favours.”

Lee (31) said he’s now warned his mum and dad not to give Billy any more treats and has put him on a diet to shed the pounds.

He said: “I’ve told them the overfeeding needs to stop. The trouble is he has these sad puppy dog eyes and they fall for it every time.”

“Billy is really important to me, but I know he’s got to lose some weight because being the size he is could really harm his health in the long run.”

As part of his new fitness regime, Billy is now being given dog food only and enjoying plenty of exercise, including playing with the neighbour’s cat in the garden. As he sheds the fat, his energy levels are improving and he seems much happier.

Total sample size for the PAW Report 2016 pet owner survey was 4,252 dog, cat and rabbit owners aged 18+ who live in the UK. Fieldwork was undertaken between 21 and 30 June, 2016. The survey was carried out online. The figures have been weighted and are representative of the population by pet species (cat, dog or rabbit owners) and the owner’s gender, age and region.

Total sample size for the PAW Report 2016 professional survey was 759 veterinary professionals. Fieldwork was undertaken between 6th June and 10th July, 2016. The survey was carried out online through an open link. 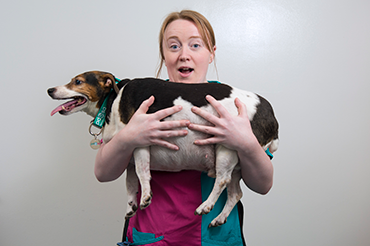 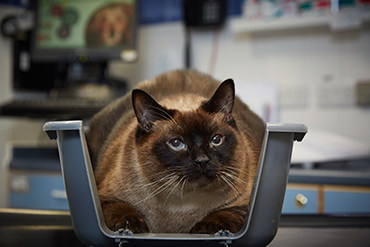 Do you have a podgy pet that could stand to lose a few pounds? Why not enter Pet Fit Club '18

Your donation, big or small, goes towards helping sick and injured pets in  across the country.

Take a look at our diet and exercise tips to help keep your pet healthy.