Heroic French police dog Diesel, tragically killed as he led a raid on the Paris terror cell last month, is to receive the PDSA Dickin Medal – recognised worldwide as the animals’ Victoria Cross. The decision follows a formal nomination from The Sun newspaper.

The medal was instituted by the UK’s leading vet charity, PDSA, in 1943. It is the highest animal honour in the world and Diesel’s will be the 66th PDSA Dickin Medal to be awarded.

On the morning of Wednesday 18 November, five days after the Paris attacks which killed 130 people, the French national police forces, including RAID, were involved in a security operation in the suburb of St-Denis.

Armed police began searching an apartment where the suspected leader of the Paris attacks, along with six other terrorists, was staying.

Diesel’s handler was on duty as sporadic gunfire came from the apartment. When the shooting stopped, Diesel’s handler* reports: “After a few minutes we decided to send in the dog to see if the zone was clear.

“He did a tour of the first room, then he went into the second room and dashed forward. I think he’d found someone. Then I lost sight of him and the gunfire started again.

“His role was to open the way for the rest of us. He uses all his senses to detect if anyone is present and if he can get to them, to go and bite them. If not, he stands and barks to indicate where the person is hiding.

“I had absolute confidence in him, and him in me. Both of us knew how the other would behave in the situation.”

At 10am local time, Diesel was pronounced dead from multiple gunshot wounds.

Major RULP Jean-Marc Lenglet from the French National Police, said: “Diesel’s handler has been deeply affected by the death of his dog, as have many thousands of well-wishers who sent messages of condolence for Diesel who died in the service of his country.”

The formal presentation of Diesel’s PDSA Dickin Medal will be made in 2016. PDSA Director General, Jan McLoughlin, said: “Following the tragic terrorist events in Paris last month, where many innocent people lost their lives, Diesel was instrumental in helping the French police locate and deal with the perpetrators.

“When news emerged of Diesel’s death there was a huge outpouring of grief . As guardians of the world’s most prestigious animal awards programme, we were inundated by messages from members of the public to recognise his heroism.

“The PDSA Dickin Medal recognises conspicuous devotion to duty in the theatre of conflict and Diesel is a truly deserving recipient. His gallant actions helped to protect human life in the face of imminent danger and we are very proud to honour him in this way.”

Since the introduction of the Medal by PDSA founder Maria Dickin CBE in 1943 it has been awarded to 30 dogs (including Diesel), 32 World War Two messenger pigeons, three horses and one cat.

A spokesperson from The Sun, said: "Our readers will be delighted that PDSA has supported The Sun's nomination and awarded a Dickin Medal to Diesel.

"On the day he was shot hunting down the perpetrators of the Paris terrorist atrocities we were flooded with messages of condolence for Diesel and admiration for his bravery.

"Sun readers are rightly proud of their pets and it's only right that fearless dogs like Diesel are also remembered for their service."

*For security reasons, the identity of Diesel’s handler has not been disclosed. 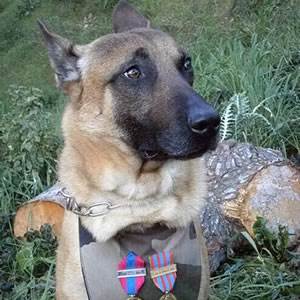