PDSA Commendation awarded to PD Canto for devotion to duty

A five-year-old German Shepherd is being honoured by leading pet wellbeing charity PDSA, after being seriously injured while on duty with West Mercia Police.

Police Dog (PD) Canto attended a presentation in his honour at PDSA’s Head Office in Priorslee, Telford, with his handler, Police Constable Emma Worrall. The charity’s Director General, Jan McLoughlin, presented PD Canto with his award and commented on his ‘exceptional contribution to our local police force’.

PD Canto and PC Worrall were called to an incident last year in which a man was armed with a knife.

PC Worrall explained: “As soon as we entered the property, we were confronted by the man, wielding a large kitchen knife. I released my hold on Canto’s collar and gave him the command to bite and detain.

“Canto leapt towards the man as commanded, but rather than bite, he fell to the floor. I was shocked because Canto is an experienced dog, and it was unlike him not to carry out my commands.”

PD Canto barked at the man, which distracted him enough for officers armed with tasers to take control of the situation.

As the stand-off concluded, PD Canto fled into another room of the flat. Emma followed, concerned by his behaviour. She closed the door to give them some peace and quiet, allowing her to examine him to see what was wrong.

To her horror, she saw a pool of blood at his feet and covering his front paws and a huge stab wound across his chest.

Emma recalls: “My hands were covered in Canto’s blood. I couldn’t believe that he had been stabbed, while trying to do his job.

“As he was still able to stand, I put him on his lead and ran to my car, shouting to my colleagues what had happened.”

PD Canto returned home with Emma the day after his operation and after a well-earned spell of recuperation, re-joined Emma at work.

PDSA’s Director General, Jan McLoughlin, said: “PD Canto’s story really highlights the vital role that police dog teams play in local policing and demonstrates the perils they can face. I’m honoured to present him with the PDSA Commendation for his actions that night and to celebrate his contribution to our local police force.”

Discussing PD Canto’s award, Emma said: “I am so proud of Canto for being awarded the PDSA Commendation. He is an exceptional Police Dog with a fantastic temperament. He visits schools and enjoys having a fuss from the children, while also having the ability and drive to work competently in serious situations while on duty. I thought I’d lost him that day, so to see him here with his award is a very special moment.”

The PDSA Commendation is part of PDSA’s Animal Awards Programme, which comprises the PDSA Dickin Medal – the animal equivalent of the Victoria Cross, the PDSA Gold Medal, known as the animal’s George Cross and the PDSA Order of Merit, the animal’s OBE.

To date, the PDSA Commendation has been awarded to 120 animals, including dogs, horses, cats and a rabbit.

Celebrating its centenary this year, PDSA is the UK’s leading pet wellbeing charity and strives to improve pets’ lives through providing preventive care, educating pet owners and treating pets when they become sick or injured. 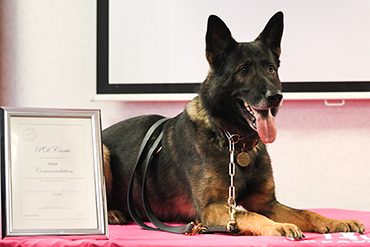 From extraordinary bravery and exceptional devotion to duty – the PDSA awards programme recognises animals in society. Read heroic, inspiring stories of how animals have helped and saved us.

Your donation, big or small, can help us make a world of difference to a vulnerable pet in need.