Cash in the kitty

A ginger cat has been saved by our vets after swallowing a 5p coin which left the poor puss with suspected metal poisoning.

Steve and Frances Gwillm, from Ystradgynlais, near Swansea, initially put their cat Kevin's symptoms down to a bug, but after several days of being increasingly distant, weak and off his food they became concerned.

The family took the two-year-old pet to our Swansea Pet Hospital where our vets discovered the cause of his woes - a coin from their daughter's piggy bank.

Lucy Knight, PDSA vet, said: "When Kevin was brought in he was very unwell and had a lot of tummy pain.

"We carried out x-rays and were gobsmacked when we saw this coin on the screen! However, the object was quite small and initially we weren't sure if this was the only cause of his illness."

After stabilising Kevin, the vet team carried out surgery to remove the coin from his stomach in an hour-long operation before he was taken to the recovery ward. However, that wasn't the end of Kevin's problems as he remained jaundiced and required close monitoring.

Lucy added: "We called veterinary poison experts at the Veterinary Poisons Information Service (VPIS) and explained that we'd removed a 5p coin from Kevin's stomach. They told us that because it had been minted in 2010, the metals it contained were potentially toxic. Even though we had removed the source of the toxin, Kevin wasn't out of the woods as metal poisoning can cause ill-effects even weeks later, so it was vital to keep a close eye on him.

"Apparently, 5p coins made after 2012 featured a different metal which isn't as poisonous if swallowed."

Kevin spent an extra night at the Pet Hospital while he received supportive treatment and was helped to eat, before he was allowed to return home, with detailed instructions on further signs of poisoning to look out for.

Owner Frances said the family were hugely grateful to us for the care Kevin received and said he had now made a full recovery.

The mother-of-four said they believe the curious cat had got his paws on the 5p from their daughter Bobbi’s coin collection.

She said: “When they told us they had removed a 5p coin we couldn’t believe it! Then we realised he must have somehow swallowed one that must have been lying around from Bobbi’s collection.

“She’s only five-years-old and like a magpie. She loves anything shiny so coins are a real favourite for her!

“We’re now much more careful to ensure no coins are left out and Bobbi knows to put them straight in the piggy bank.”

Our vets regularly see cases of pets eating unusual objects.  In some circumstances this can be fatal, for example if they are toxic or if they cause a blockage in the intestines. Pets, especially younger dogs, like to use their mouths to investigate objects as well as to eat. Sometimes a pet will swallow an item by mistake, even though they had only meant to investigate it.

Owners should speak to their vet for advice as soon as possible if they suspect their pet has eaten something they shouldn’t have.

This December as many as 50,000 sick and injured pets will need our help. This vital lifeline is there to provide expert treatment and loving care when it’s needed most, carrying out life-saving miracles every single day. But we receive no government funding and rely entirely on public support. 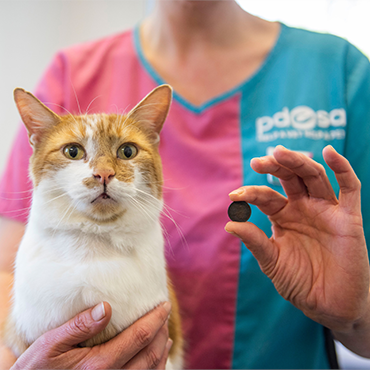 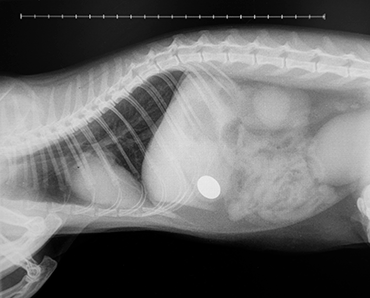 Pet having a problem? Our free Pet Health Hub has lots of vet-approved advice on loads of symptoms and conditions in dogs, cats and rabbits. Visit the