Rhodesian Ridgeback crossbreed, Sam (7), had an emergency operation to remove around half of his small intestine after our vets discovered the corn husk was causing it to rot away.

PDSA Senior Vet, Susie Hermit, from our Glasgow Shamrock Street Pet Hospital, said it was one of the most severe cases she had ever seen:

“We found that the corn-on-the-cob husk was causing a major blockage in Sam’s small intestine, restricting the blood supply.

“Unfortunately, some of the damage was irreversible and we had to remove around half of his intestine, which had begun to die off and rot. Sam was very lucky to survive. He was at high risk of developing potentially-fatal blood poisoning and the operation to remove such a large section of his intestines was incredibly risky.”

Sam’s owner, Lorraine Graham (43), from Tollcross, was petrified at the thought of losing her beloved pet.

She said: “We first noticed something was wrong was when Sam started being sick and it gradually got worse until he was being sick every 20 minutes.

“I couldn’t believe it when PDSA x-rayed him and told us what was causing the blockage. We hadn’t been eating corn-on-the-cob so he must have picked it up while outside,” she said.

“He was so weak and lethargic that I knew he was facing the fight of his life. Thankfully he pulled through and I can’t thank PDSA enough for saving him.”

“We’re extra careful with him now but I’m really happy that he’s made such a good recovery. He’s back to his old self again and is eating normally which is great.”

Our vets are issuing a warning to pet owners ahead of the Bank Holiday weekend, as many people may be planning barbecues.

Corn-on-the-cob was one of the most common items removed from pets last year with 28 cases treated by our vets. Other strange items swallowed by pets include bones (51 cases) and kebab sticks (7).

Thanks to funding from players of People’s Postcode Lottery, we’re educating pet owners about the phenomenon of pets eating strange objects – known as ‘pica’ - and how to keep their animals’ safe.

Susie added: “Pets like to use their mouth to investigate objects as well as to eat. Puppies and younger pets will often swallow an item by mistake, even though they had only meant to investigate it.

“Something like corn-on-the-cob might seem harmless enough but if an object moves along the digestive system, as it did with Sam, it can cause a tear or life-threatening blockage.

“If you have pets at home, try to keep anything dangerous or easy to swallow out of paws’ reach. Only let them play with suitable pet toys and try to supervise them to avoid any accidents. If you do suspect your pet has swallowed something you should contact your vet for advice immediately.”

For tips and advice on how to keep your pets safe during barbecues visit here. 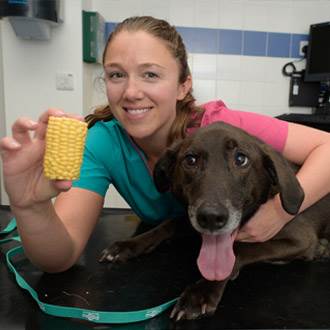