Zakk, a Collie-Alsatian cross, ended up with severe wounds to his legs and paws last Bonfire Night after becoming spooked by fireworks and bolting from his owner’s garden.

The 10-year-old dog from Stoke had been let out into the garden by owner Kirsty Burton when a neighbour released fireworks in their garden. Zakk immediately panicked at the sound and ran off.

Kirsty (22) said: “It was quiet when I let Zakk out, then the fireworks suddenly started. Zakk just fled, he jumped straight over the gate and ran off.

“We spent the next few hours searching for him, with no luck. We were so worried. One of our neighbours found him in their garden the next day, he had blood all over him and his paws were cut.”

Zakk was taken to PDSA’s Stoke Pet Hospital where vets assessed the wounds on his front legs and paws.

Duncan Senior, PDSA Senior Vet, said: “We can’t say for sure what happened to Zakk that night but he sustained some quite nasty injuries. It was initially hard to see the extent of the wounds to Zakk’s legs due to swelling.

“We cleaned and dressed his wounds and prescribed antibiotics to treat the infection.

“It took around a month for Zakk’s wounds to heal sufficiently and he’s now made a full recovery, but he is incredibly lucky that he didn’t sustain more serious injuries.

“This case highlights how important it is to keep our pets safe at this time of year. They can easily become scared and go missing, putting them at risk of road accidents or other hazards.”

Kirsty still doesn’t know exactly how Zakk sustained his injuries but she is now much more wary about his safety during the fireworks season.

She said: “He might have been hit by a car but we’ll never know for sure. Zakk had never shown any fear of fireworks before but I’ll be more wary before letting him out for the toilet or taking him on a walk.”

PDSA vets treated 800 animals for fireworks phobias and injuries between October 2014 and October 2015 and this is likely to be just the ‘tip of the iceberg’ as millions of pets are also frightened by the noise of fireworks.

Thanks to funding support from players of People’s Postcode Lottery, PDSA has produced a fireworks advice guide for pet owners. You can read our advice on our Pet Health pages. 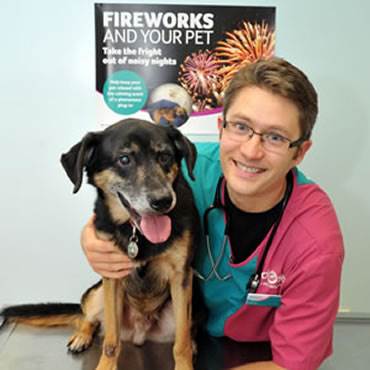