A curious canine underwent surgery at one of our Pet Hospitals after swallowing a poo emoji toy.

Teddy the Lhasa Apso was taken to the out-of-hours service at our Leicester Pet Hospital after his owner, Kerry Worth, became increasingly concerned when he started vomiting and stopped eating.

Elly Brocklebank, PDSA Senior Vet, said: “When we first saw Teddy he’d lost weight and was quite dehydrated as he hadn’t been eating or drinking much.

“The first scans and x-rays didn’t reveal a cause, but we couldn’t rule out a blockage as soft objects can look like normal gut contents. However, even after intensive care Teddy was still really poorly, and repeated imaging made us more suspicious there was something causing a blockage in Teddy’s guts. Untreated, this can be fatal, so we decided to carry out exploratory surgery to see if we could find the problem.

“When we got to his small intestine we found an object, which turned out to be a poo emoji soft toy. You think you've seen it all, but this really was a new one for us!”

Our vets were able to remove the blockage and confirm that the rest of Teddy’s organs looked healthy. However, complications following this kind of surgery are common, so Teddy needed close monitoring to make sure he was recovering well.

Kerry (48) from New Parks, Leicester, said they couldn’t believe it when they were told what Teddy had swallowed.

She said: “We were really worried about him. At first I’d thought it might have been a virus but he was so unwell.

“When the vets told me all the problems were down to this fluffy poo emoji toy I couldn’t help but laugh, you really couldn’t make it up!

“At that point Teddy still had to recover from his surgery, but I was relieved that the vets had found the cause, and he seemed so much better almost straight away.”

Mother-of-three Kerry said the toy was a keyring attachment belonging to her youngest daughter Tyla (13).

She added: “Needless to say she doesn’t want it back! Teddy has now made a full recovery and I’m so grateful to PDSA for everything the vets did as we would have really struggled to afford the cost of his treatment. We’re now very careful not to leave anything lying around that Teddy can get his paws on.”

We sees many cases of pets eating unusual objects every year, and in some circumstances a gut blockage can sadly be fatal.

Pets, especially puppies and younger dogs, are naturally curious and like to use their mouths to investigate objects. Sometimes, a pet will swallow an item by mistake, but this can be quite dangerous, as many items can cause a gut blockage and some might also be toxic or sharp. Owners are advised to speak to their vet for advice as soon as possible if they suspect their pet has eaten something they shouldn’t have.

Worried your pet has eaten something harmful? 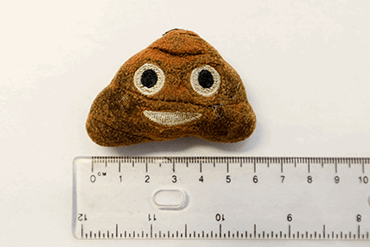 Worried that your pet has eaten something dangerous like Teddy did? The Pet Health Hub is full of useful information written by our veterinary specialists to help you better understand your pets health.