No lumps not two for chubby Cocker Spaniel Teddy

A chubby Cocker Spaniel from Stoke, who gets served mince beef and chicken breast every day, all washed down with his own brew, has been put on a diet as he’s carrying too many pounds.

Teddy, 6, was already on the podgy side but after developing a problem with his ears that required steroid treatment he’s now ballooned to over 4 stone (26kg) - around 30% over his ideal body weight.

His owner Ian Leese, 62, says Teddy enjoys an active lifestyle including regular trips to the coast where he enjoys running on the beach and swimming in the sea, but his weight still remains a problem.

Ian said Teddy receives the occasional dog treat, and is also partial to a couple of cups of tea a day - complete with semi-skimmed milk and sugar. But, following advice from PDSA vets, Teddy is now on the path to a healthier future.

“Teddy had chicken breast with vegetables including sweetcorn and carrots and he also had minced beef with vegetables but now we’re more careful about how much he gets, and the vet recommended some appropriate food for him,” says Ian.

“He does have some dog biscuits and he’ll also eat fish, pretty much anything really. The steroid medication for his skin does make him hungrier but we know it’s important not to overfeed him.

To help get Teddy in shape, Ian has entered his dog our PDSA Pet Fit Club competition – a six month diet and exercise challenge.

We are appealing for the UK’s fattest pets to enrol in the contest. The call comes as stats reveal up to half of UK pets (46% of dogs, 34% of cats and 30% of rabbits)* are believed to be overweight or obese.

Ian added: “PDSA have been great and they’re helping us get Teddy back in shape.

“We’ve switched his dry food biscuits for ones that are healthier and we’ve cut his food portions right down. The vets suggested stopping his cups of tea but we feel we can’t do that as he loves it so much we can’t resist. Instead, we’re now using skimmed milk instead of semi-skimmed and cut out the sugar to reduce the extra calories.”

Teddy attends Stoke PDSA Pet Hospital where our vets are providing ongoing advice and support in a bid to help the podgy pooch lose weight. 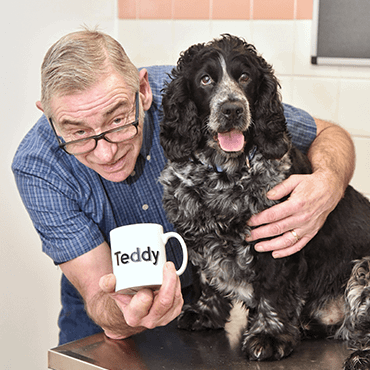