Doberman puppy gets mouth stuck in watering can.

A dopey Doberman puppy ended up needing emergency treatment from PDSA vets after he got his mouth stuck in a watering can.

Three-month-old Cassius has been watching his owner Chloe Watton tend to her house plants, when she left the watering can on the side he seized the chance to investigate.

Chloe (44) from Hampstead Heath, London, said: “All of a sudden I heard this whimpering, when I looked I could see his face stuck in the watering can.

“I tried to remove it but couldn’t. Luckily my daughter Mercedez was home from University so we jumped in the car and took him straight to PDSA.”

On arrival at Hendon PDSA Pet Hospital, Cassius was rushed straight through for treatment. He was becoming increasingly distressed, producing lots of saliva and the stuck can was causing him pain.

Tracy Lutwyche, Head Nurse at Hendon PDSA Pet Hospital, explained that Cassius was sedated before the watering can was cut so that the vet team could remove it from his jaw safely.

She said: “The can was really stuck so we weren’t able to release it while he was so anxious.

“Once we were able to cut the can we removed it relatively easily and Cassius was ready to go home again after a few hours. He was a little sore and swollen, so we gave him some painkillers to help him with his recovery.”

Chloe said she was grateful to PDSA for the treatment Cassius received and now keeps a closer eye on him so he doesn’t get his head stuck in anything else he shouldn’t.

Pets can get themselves into all sorts of scrapes and mishaps. To learn what to do in an emergency, register to receive our free pet first aid guide with lots of helpful information and advice here 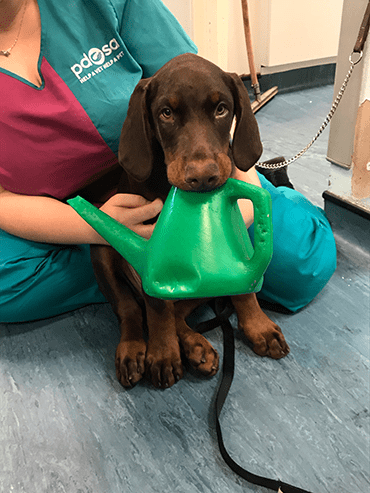 Get your hands on our free first aid guide so that you can be prepared in a pet emergency.