Skittles was found impaled on railings

Incredibly, he survived, and was selected as a finalist in PDSA Pet Survivor of the Year 2018. Read his breathtaking story. 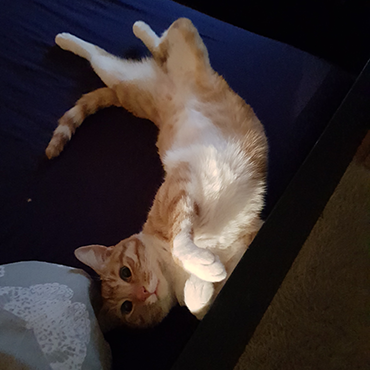 My age at the time: 4 years

Where I live: North West London

I was treated by: RSPCA Putney & PDSA Hendon

My humans are: The Forde family 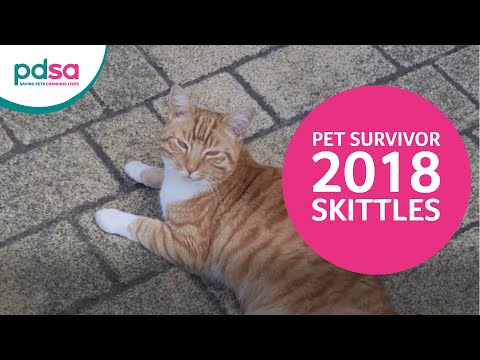 When Skittles went missing overnight from his home his worried owner, Shanakei, was searching for him for days. She was becoming increasingly concerned for him, but at the time she was completely unaware that her ginger tomcat had been found impaled on railings near to her home, rescued by RSPCA and the London Fire Brigade and taken to a nearby vet.

Stunned that the cat was even still alive, the vets performed emergency surgery to remove the railings from Skittles. Miraculously, the railings had narrowly missed all his vital organs, and they were even able to save his back leg, which at first they thought might have to be amputated. Once awake, Skittles was taken to the RSPCA Harmsworth Animal Hospital to recuperate. He wasn’t microchipped, so the staff were doing everything they could to track down his owner.

Meanwhile Shanakei eventually spotted this incredible story in the papers, and realised that the mystery cat was in fact her missing Skittles. She contacted the centre and was reunited with him the next day. Skittles was able to go home for plenty of TLC with his family, but he wasn’t yet out of the woods yet. He needed follow up care, and ended up needing a further two operations to fully recover from his ordeal, which were provided free by Hendon PDSA Pet Hospital. Shanakei also raised money using a Go Fund Me account to pay the existing private vet bill of around £3k.

Incredibly, just a few weeks after his final operation, Skittles was up and about. Eventually, his stitches were out and he was getting out exploring again. To look at him now, you’d never even know anything had happened to him.

It’s impossible to know how Skittles ended up on the railings, but it’s thought he fell or slipped from a building above and landed directly on the railings. Whatever the cause, he is incredibly lucky to be alive and was nicknamed ‘Britain’s Miracle Cat’ by the media.

From cats caught in illegal traps, to dogs show with a crossbow to rabbits attacked by foxes, read about some of our miraculous previous winners and finalists.