A French Navy Commando dog has today (23 April) received the highest honour available for animals – the PDSA Dickin Medal – for his life-saving actions while on duty.

The vet charity posthumously awarded Belgian Malinois Leuk with the prestigious award, also known as the animals’ Victoria Cross, for his unstinting bravery and life-saving devotion to duty.

A private ceremony took place in Brittany, where a monument commemorating all dogs who have died serving with the French Navy was also unveiled. View the video of Leuk's story.

Leuk served with the famed French Navy Special Forces ‘Commando Kieffer’ unit, where his extraordinary abilities had gained him the nickname of ‘Leuk la Chance’ (Lucky Leuk) during his last rotation. He is the first French Military Working Dog to receive the PDSA Dickin Medal in its 78-year history.

PDSA Director General Jan McLoughlin, who presented the medal virtually, said: “Leuk’s actions undoubtedly saved the lives of his unit on multiple occasions. He pushed through flames and bullets to succeed, fearlessly exposing and taking down enemy insurgents; he truly is a worthy recipient of the PDSA Dickin Medal.”

The world-renowned PDSA Dickin Medal was introduced by PDSA’s founder, Maria Dickin CBE, in 1943. It recognises animals that display conspicuous gallantry or devotion to duty in the field of military conflict, and is the highest award any animal can receive.

Leuk was trained in a wide range of insertion and extraction techniques, including airdrops, combat swimming, and hoisting onto ferries. His specialty was to follow a drone in order to check for Improvised Explosive Devices (IEDs).

Leuk’s final mission took place in May 2019 – he was killed by an enemy whose position he had single-handedly exposed.

Commenting on the award, PDSA Director Jan McLoughlin said: “Leuk’s exceptional abilities and determination were apparent to all who served with him, and he was clearly a respected and vital part of the team. His bravery and devotion make him a thoroughly deserving recipient of the PDSA Dickin Medal.”

Reacting to the award, Commander Nicolas, the CO of Commando Kieffer, said: “It is a great pride for all of us to see Leuk honoured in this way with the prestigious PDSA Dickin Medal. His story helps to demonstrate just how important animals are to our armed forces, and the key roles that they play. To see Leuk’s name now listed alongside such distinguished company is a fitting testament to this exceptional dog. More than that, his death also led us to erect a monument dedicated to the French navy commando dogs who were killed in action since Word War 2.”

The PDSA Dickin Medal is a large, bronze medallion bearing the words “For Gallantry” and “We Also Serve” all within a laurel wreath. The ribbon is striped green, dark brown and sky blue representing water, earth and air to symbolise the naval, land and air forces. To date, it has been awarded to 36 dogs (including Leuk), 32 pigeons, 4 horses and a cat.

Leuk is the 73rd recipient of the PDSA Dickin Medal, and the first French Military Working Dog to receive the honour. The last recipient of the award was British Military Working Dog, Kuno. He received the award in November 2020 for his life-saving actions during his second deployment in Afghanistan, when he tackled an insurgent during a night raid, breaking a deadlock. He was injured during the mission, and became the first military dog to be fitted with a prosthetic paw. 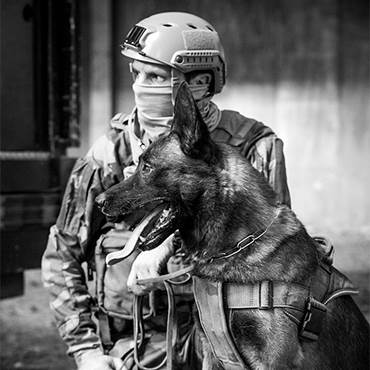 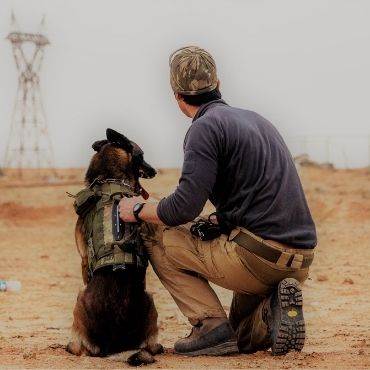 You can find the full video of Leuk's amazing story here.