Tiny kitten Odin had to face emergency surgery at just 8-weeks-old, all because of cat flu. Luckily, a simple vaccination can put a stop to cat flu.

Little Odin and the rest of his litter were all infected with cat flu, passed to them by their unvaccinated mother.

Poor Odin struggled to fight the disease and was left with a snotty nose and painful, ulcerated eyes.

Odin had to face emergency surgery

Odin’s eye was so badly affected by cat flu that it ruptured. At just 8-weeks-old he had to be rushed into surgery where our vets performed the delicate operation to remove his eye.

PDSA Vet Karla Lemmer says, “Odin was a very sad case and despite our best efforts, we were unable to save his eye. Thankfully, he was strong enough to survive the surgery and is adapting well.”

If Odin’s mum had been vaccinated, Odin and the rest of his litter wouldn’t have had to suffer.

Thankfully, Odin overcame the worst of the disease but he’ll have to live with cat flu for the rest of his life. As well as losing his eye, Odin will always carry the disease and stressful events or other illnesses could mean he gets sick again. 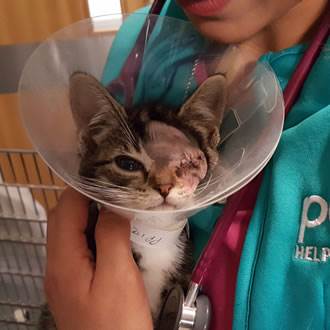 Vaccinations save lives. Find out how they work, what they protect against and why we recommend them for your pets.