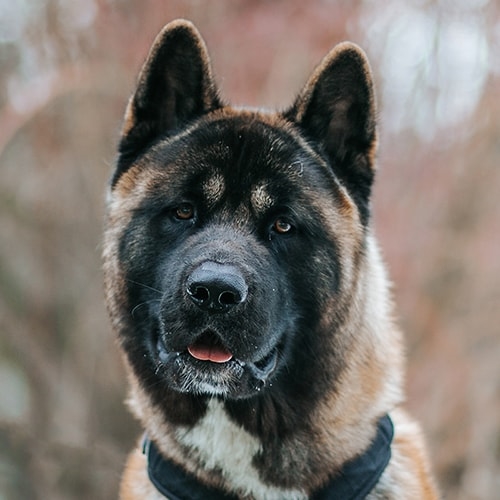 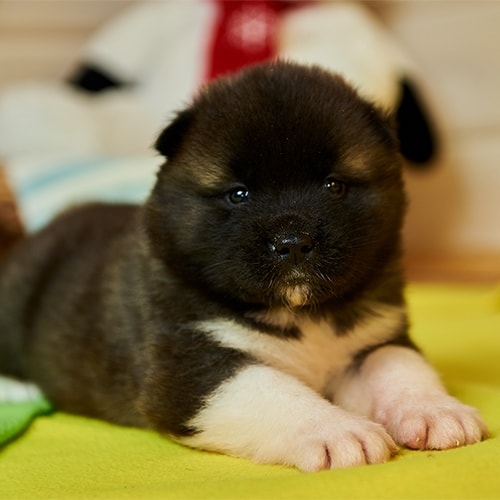 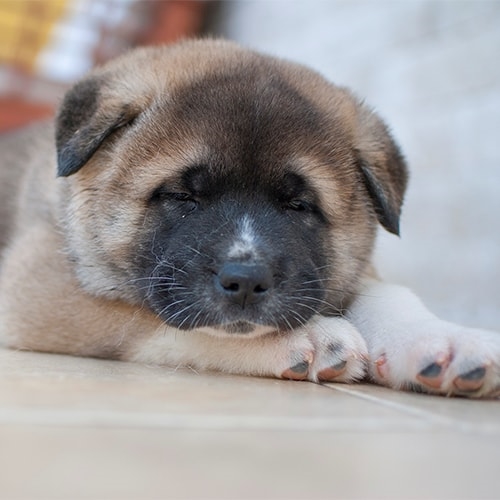 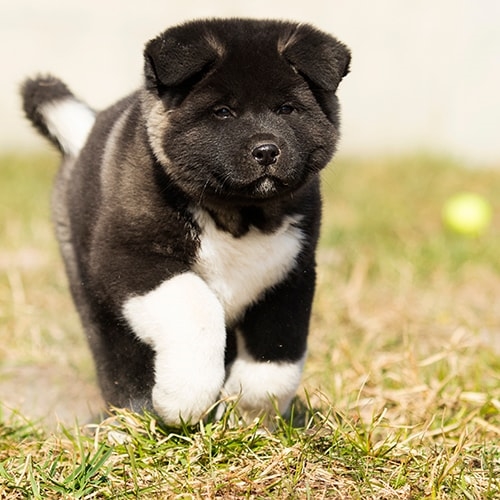 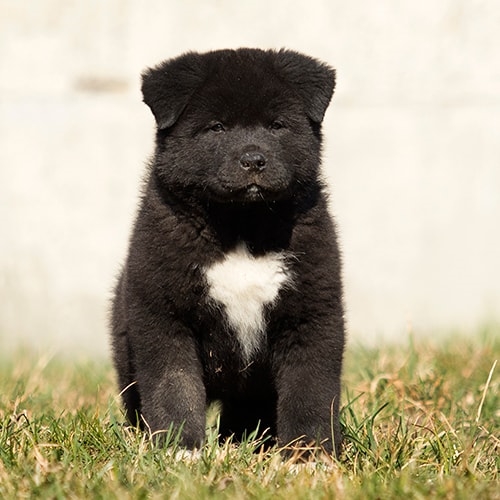 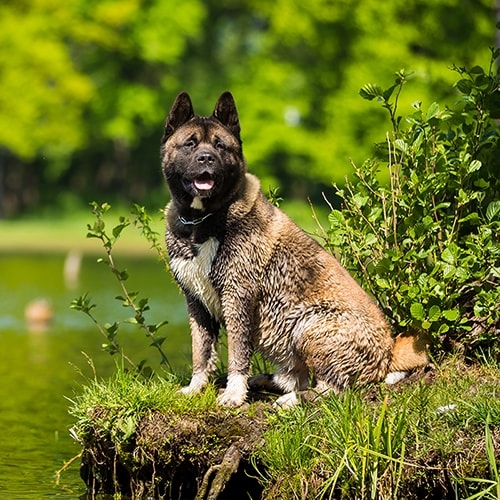 Originating from Japan, Akitas are known for being incredibly loyal family pets. They're large dogs and very strong. Although they were originally bred as guard dogs due to their fearless and loyal personalities, Akitas were often used for hunting in the past and so have a high prey drive.

There are actually two breeds of Akita. The original Akita Inu was bred in Japan and then the Akita was thought of to have been further developed to be stronger in stature. This article focuses on Akitas.

While Akitas adapt well to family life, they are also very large and therefore would do best with experienced owners. They need an active household willing to take them everywhere on adventures because they get so attached to their families!

Akitas are large dogs who will thrive in the right household, but unfortunately like many purebred dogs they are prone to certain health issues. There is currently testing and screening for some of the problems Akitas can have.

If you’re thinking of buying an Akita puppy, we’d recommend getting one from a Kennel Club Assured Breeder, as they meet extra requirements including health screening. Parents having the relevant screening reduces the chances of your puppy being affected by these upsetting conditions. We’d also recommend discussing the medical history of your potential puppy’s parents and grandparents and think very carefully before taking on a dog with any of the health conditions listed in the family line.

The potential health problems that Akitas are prone to include:

If you want to minimise the risk of your dog getting problems due to exaggerated features, you can read our advice on choosing a pedigree dog.

Caring for your Akita

Akitas can be great pets for the right household, but their large size and strength mean they’re not suitable for inexperienced owners. They need plenty of exercise to keep them happy and healthy and love nothing more than going on adventures with their owners.

Because Akitas can be wary of strangers, your dog will need to be well socialised from a young age to make sure they grow into a well-rounded dog. They’re a very intelligent breed so you’ll need to make sure you can keep them occupied, otherwise you might find they take their boredom out on your home and furniture!

As with any dog, Akitas are likely to make noise and it’s down to the individual dog how much they bark or vocalise. Akitas have a reputation for barking only when they deem it necessary (which can differ from their owner’s idea of what is necessary!). You may find they bark to alert you of strangers, when they are unhappy with something or even when they are bored. If you’re having problems with excessive noise or barking, we recommend seeking the advice of an accredited behaviourist.

Akitas are very intelligent and pick up new things quickly, but beware that this includes bad habits as well as good! You’ll need to use ongoing positive, reward-based training with your Akita and this needs to be consistent within your household. If you aren’t an experienced trainer, or are a first time dog owner, then you should ask for the help of an accredited trainer.

Akitas are independent and due to their intelligence this is often mistaken for stubbornness. You’ll need to take a firm but fair approach to training and make sure your dog has clear boundaries. They get bored easily so you may want to get brain puzzles and keep their toys on a constant rotation so they don’t lose interest in them.

As Akitas get so attached to their families, we wouldn’t recommend leaving them alone as many don’t cope well with this. If you do need to leave your Akita alone, this should never be for more than four hours and you’ll need to make sure you leave them with something to keep them occupied.

Remember to socialise your Akita from a young age with lots of other dogs, different people and different experiences. This is especially important for Akitas due to their wariness of strangers and other dogs.

Akitas are active dogs and although they were originally bred as guard dogs they were also used for hunting which means they still love to chase! While you’ll need to make sure your Akita gets plenty of exercise, only let them off the lead in secure areas. It’s best to keep them on a lead when walking just in case they smell or spot something to chase!

Your Akita will need a minimum of two hours of exercise every day – this can be spent running and walking. On top of this, they’ll also enjoy playing in a large, secure garden with plenty of training so they can keep their brain active. Akitas tend to love water so many enjoy a swim every now and again.

Don’t forget to keep an eye on your Akita in warmer weather – as they have thick coats for colder climates, they are prone to overheating in very hot weather.

Although their fur is short, it’s dense, so Akitas shed a lot! Be prepared to do a lot of hoovering around your home and at minimum a weekly brush to help get rid of dead hairs. You may want to brush your Akita more regularly during the warmer months when they shed more.

You might like to get your Akita professionally groomed every three months or so to keep their coat in the best condition.

Akitas can fit in really well with families due to their loyal and loving nature. That being said, we wouldn’t recommend an Akita if you have young children as they could accidentally knock them over due to their large size and strength. Akitas can also be protective and possessive with toys and food, which younger children may not understand.

They need to ideally be around people who understand the breed. Always supervise children and vulnerable adults with your Akita and make sure you can recognise the signs of unhappiness or anxiety in your dog to help avoid any conflicts.

Akitas and other pets

It’s really important that your Akita is well socialised from a young age to make sure they are comfortable and happy meeting new dogs. Akitas tend to be naturally wary of unfamiliar dogs so socialisation will need to be ongoing throughout their lives.

As they have been used to hunt a variety of wildlife in the past (including bears!), the prey drive is still very strong in Akitas today. You’ll need to keep a close eye on them around other pets and we wouldn’t recommend keeping an Akita with smaller pets.

When you’re out walking, we’d recommend keeping your Akita on their lead just in case they see something they’d like to chase!

Your Akita’s diet will vary depending on their age, lifestyle and any medical conditions they may have. You’ll need to feed them a complete, commercial dog food to keep them slim and healthy.

Your vet or vet nurse will be able to tell you how much your dog should be eating if you’re not sure. You should feed them a good quality, commercially available and complete dog food and it’s usually recommended to split their daily allowance into two meals. If you give your dog an occasional treat or use treats for training, remember to take this into account and reduce their daily meal allowance to avoid them gaining weight. Treats shouldn’t make up more than 10% of their recommended daily calorie intake or they can unbalance their diet.

You should try to feed your dog at the same time every day to get them into a routine. Remember to leave a gap after eating and before exercising.

The cost of owning an Akita

You can expect an Akita to cost you a minimum of £105 per month after purchase and set-up costs and over £17,000 across their lifetime.

Costs you’ll need to think about include:

Adopting an adult dog from a rescue centre may be a cost-effective option, with the added advantage of giving a home to a pet who really needs one – check if the rehoming centre you’re looking at asks for a donation for rehoming.

If instead you’re buying a puppy from a breeder, you’ll need to factor in the cost of the pup. Beware unusually cheap puppies as they could come from a puppy farm. If you’d like to buy a pedigree Akita puppy, we recommend looking for a Kennel Club Assured breeder. These breeders must do extra health tests and meet certain standards of breeding.

* It’s always better to plan ahead and budget or get pet insurance in case your pet gets injured or unwell. If you are having difficulty with veterinary costs, you can check if you are eligible for treatment at PDSA here.

If you’re considering pet insurance, our PDSA Pet Insurance could be a great option for you and it’s quick and easy to get a quote online.

Do plenty of research before you think about getting an Akita. Make sure you will be able to give them the time and attention they need. Akitas require a lot of work from their owners, but in return you’ll get a loyal and loving friend for life. They take a lot of hard work so you’ll need to make sure you’re absolutely ready before committing to getting an Akita.

There are plenty of rescue centres across the country where you may find an Akita. Breed-specific rescues that specialise in Akitas are out there too. You’ll need to ask any rescue centre about the dog’s history to make sure they will be comfortable in your home. Good rescue centres should run home checks, neuter their dogs and let you know of any potential health or behaviour problems after health or temperament assessments.

If you buy from a breeder, make sure your puppy will be well socialised and that the puppy and their parents have all necessary health checks and vaccinations. We recommend looking for a Kennel Club Assured breeder as they meet higher standards and must do certain health tests. We’ve put together some advice to help you find a good breeder.

Not sure if an Akita is the right pet for you?