The liver is a very important organ with many different functions - to name a few, it liver helps digest food, stores vitamins/minerals, and very importantly, removes toxins from the body. Liver disease and liver damage can cause a wide range of symptoms, ranging from mild to serious, and unfortunately in severe cases (and cases left untreated), can sometimes lead to complete liver failure. Liver problems are most common in older dogs, but certain conditions can also affect puppies. 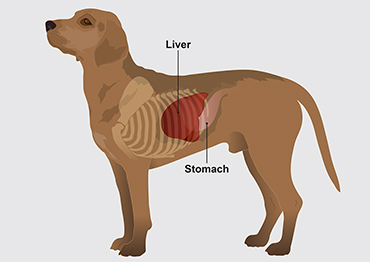 There are many different things that can cause liver problems in dogs. Some begin in the liver (such as a liver tumours and portosystemic shunts), and others are illnesses that affect other parts of the body as well (for example, a blood infection that causes many problems including liver damage). Fortunately, the liver is very good at repairing itself, so if the problem is treatable, the liver will usually be able to recover and start working again.

Liver problems in dogs can be caused by:

Hepatitis (inflammation of the liver)

There are many different things that can cause hepatitis, including infectious diseases (leptospirosis and infectious canine hepatitis), immune problems, and other diseases such as pancreatitis and inflammatory bowel disease. Some types of hepatitis cause mild symptoms slowly over time, whereas others cause severe symptoms very suddenly.

Liver cancer is most common in dogs over 10 years old - it can be primary (begin in the liver), or secondary (from another part of the body).

Certain toxins and poisons such as xylitol, blue green algae, mouldy food, toxic mushrooms and other toxic plants can damage the liver of dogs.

Some medications (such as high doses of paracetamol, certain antibiotics and anti-epileptic drugs) can cause liver damage.

Sepsis is a severe infection of the blood that can damage the liver and in severe cases, result in liver failure.

These are liver problems that dogs can be born with, for example a portosystemic shunt (a problem with the liver’s blood vessels). Congenital problems often cause symptoms very early on in life, but some dogs don’t show symptoms until they are older.

These are uncommon conditions that can lead to liver disease or liver failure. Some types are more common in certain breeds.

Contact your vet if you think your dog has symptoms of liver disease. If your dog is fitting or showing signs of serious illness, give them first aid and contact your vet as soon as possible for an emergency appointment.

You know your dog best - always contact your vet if you’re concerned.

The treatment that your dog needs will depend on what’s causing their liver problem. Your vet may suggest some of the following investigations to find out what the problem is:

If your dog is seriously unwell, it’s likely that they will need a fluid drip, medication and possibly pain relief while waiting for their results.

Your vet may recommend starting your dog on a supplement designed to protect and repair their liver. The most common liver supplements incude S-adenosylmethionine and Silibinin (silymarin). Some dogs only need supplements for a short time while they recover from an acute (sudden) liver problem, but dogs suffering with chronic (ongoing) liver problems often benefit from staying on them for the rest of their life.

There are special liver foods available that are easy to digest and contain additional vitamins, minerals to help protect and heal the liver. They are most commonly are used for dogs with chronic (ongoing) liver problems, but can also be used in the short term while a dog recovers from a problem. Always speak to your vet before starting your dog on a liver diet, especially if they are very young or have other conditions.

Some causes of liver disease (for example leptospirosis and infectious hepatitis), can be prevented by vaccination. It’s important to get your dog vaccinated as a puppy and continue with booster injections throughout their life.

It’s important to protect your dog as much as possible from any toxins and poisons that can cause liver damage. For more information, read our poisons and hazards article.

Treatment for liver disease can be very expensive, especially if your dog has an ongoing problem, needs emergency care or referral to a specialist. It’s important to speak openly to your vet about your finances, the cost of treatment, as well as what you think is right for your dog. There is often more than one treatment option, so if one doesn’t work for you and your dog then your vet may be able to offer another.